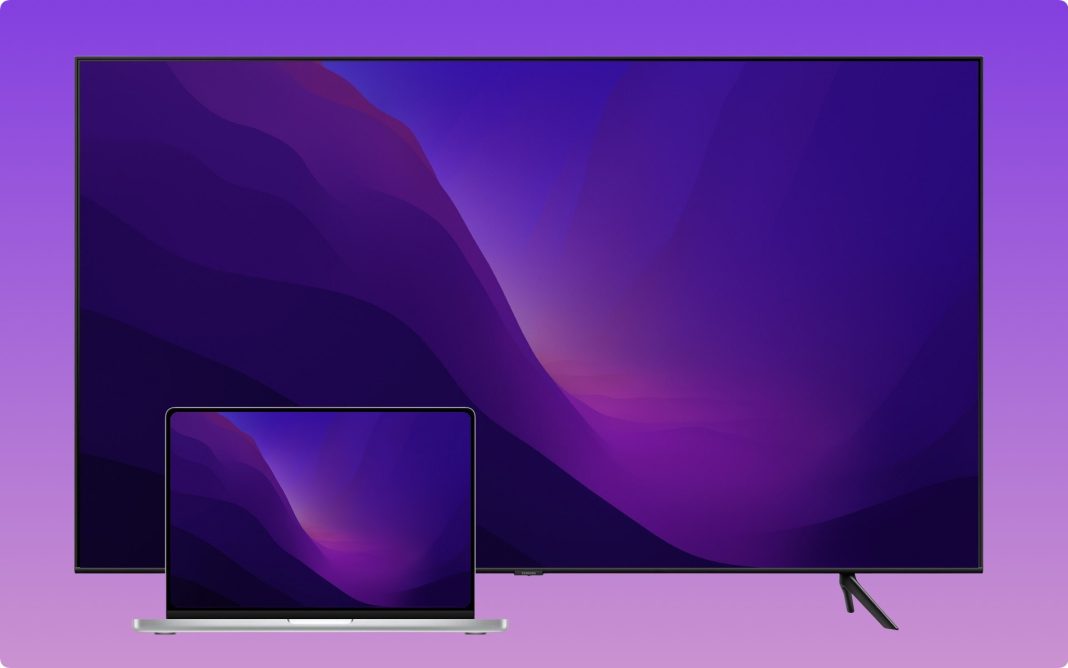 How to Connect Mac devices to Sony Smart TV

You can connect your Mac device to a Sony TV through a wired or wireless connection. There’s no denying that the wireless method is the most convenient; however, connecting your Mac through a wired connection guarantees the highest video resolution. Whichever path you choose to take, we have you covered.

How to Connect Sony TV through Apple AirPlay

Apple AirPlay is the easiest way to connect a Mac to a Sony TV. The only drawback here is that not all devices support AirPlay. For devices that do support Apple AirPlay, here are some things to ensure before connecting Sony TV to AirPlay:

1.Check that the Sony TV and the Mac are connected to the same Wi-Fi network.

2.They should be running on the latest software version.

3.You need to configure AirPlay on your Sony TV.

How to connect your Mac to Sony TV through AirPlay:

Step 1: Make certain that your Mac and Sony TV are connected to the same Wi-Fi network.

Step 2: Use your Mac to AirPlay:

Step 3: Now select your Sony TV from the list of available devices.

Fun Fact: AirPlay was first introduced as the transformation of AirTunes in 2010. Seven years later, in 2017, Apple launched AirPlay 2- the successor to AirPlay.

How to Connect Mac to Sony TV through JustStream

JustStream is the perfect application to help you wirelessly connect a Mac device to a Sony TV. It allows you to cast your Mac to Chromecast, Apple TV, or any other Smart/Android TV. The application also supports several video formats: AVI, FLV, MKV, 3GP, MP4, MKV, MOV, AVI, WMV, MP3, and WAV. But what if your Sony TV doesn’t support a video file format? That’s where JustStream shines because it has the special ability to convert unsupported file formats and stream them to your Sony TV on the go. Thanks to native Apple’s custom silicon support (M1, M1 Pro, etc.), video conversion doesn’t take a toll on the CPU, which helps prevent Mac devices from overheating.

A few other benefits of using JustStream:

How to connect Mac to Sony TV with JustStream

Step 1: Download and install JustStream from the App Store.

Step 2: Open the app and set up your account.

Step 3: Click the JustStream icon in your Macs menu bar.

Step 4: Select the media file you want to stream to your Sony TV.

Step 5: Now, select your Sony TV from the list of available devices.

How to Mirror Mac Screen to Sony TV

For the uninitiated, screen mirroring is wirelessly replicating the screen from one device to another. AirBeam TV is one of the best tools to mirror your Mac screen to Sony TV, and it supports all Sony Smart TVs launched in 2012 and onwards. With AirBeamTV, you can mirror your Mac screen to your TV to watch movies and videos or present a PowerPoint. However, this tool has a network latency of 2 seconds, which makes it inadequate for gaming. Since Apple has HDCP DRM protection, playing movies from iTunes is impossible.

How to use AirBeamTV

Step 1: Download and install AirBeamTV from the App Store.

Step 2: Open AirBeamTV and select your Sony TV from the list of available devices. (Ensure that your Mac and Sony TV are connected to the same Wi-Fi network)

Step 3: Select the video file you want to mirror to your TV.

Step 4: Enable sound by installing an additional audio driver. It is free of cost and can be downloaded here: http://bit.ly/MirrorAudio.

Step 5: The selected file will start playing on your TV (It can take some time due to network latency).

How to Connect Mac to Sony TV through MirrorMeister

What differentiates MirrorMeister from other screen mirroring applications is the ability to view two separate windows simultaneously. It can mirror videos from social media websites like YouTube and Facebook and cast photos, movies, spreadsheets, PowerPoint, etc. For example, you can cast a website on your Sony TV while watching a YouTube video on your Mac. While it does support more devices than others and exhibits some great features, the drawback of network latency is present with the tool. Forget about gaming, as there is a latency of almost 3 seconds with MirrorMeister.

How to mirror your Mac screen to your Sony TV

Step 1: Download and install MirrorMeister from the App Store.

Step 2: Open the app (Ensure your Mac and Sony TV are connected to the same Wi-Fi network).

Step 3: Opening the app for the first time will take you through a simple setup process.

Step 4: Afterwhich, the app will guide you step by step about how to connect MirrorMeister with your TV.

Step 5: Make sure you download the latest audio drivers (Free of cost) to enable sound while screen mirroring.

How to Connect Mac to Sony TV through HDMI port

HDMI is an acronym for High Definition Multimedia Interface. It has gained massive popularity because it can transfer high-quality audio and video through a single cable. While Thunderbolt and DisplayPort offer the same, if not better, functionality, the HDMI port is vastly adopted.

A wired connection would be ideal if you intended to play games through Mac because it eliminates network latency. You also get the highest resolution when connected through an HDMI cable.

However, a wired connection doesn’t offer the same convenience as a wireless one. The length of the cable restricts movement. You will also require an HDMI adaptor, which is an added cost.

If your Mac doesn’t ship with an HDMI port, you will require a Thunderbolt to HDMI adaptor or a Mini DisplayPort to HDMI converter, depending on which port your Mac features. Once you have a compatible adaptor.

How to connect your Mac to Sony TV through HDMI

Step 2: Connect the other end of the HDMI cable to the Sony TV.

Step 3: Click on the Apple logo at the top left corner and select System Preferences on your Mac.

Step 4: Navigate to Displays and select the Default for Display option.

Step 5: If you’re unsatisfied with the result, select the ‘Scaled’ option and choose the size according to your preferences.

Step 6: To output audio from the TV, open System Preferences and navigate to Sound.

Step 7: Select Output and choose the device from which you want audio to output.

These were some of the best possible ways to connect your Mac to a Sony TV. While AirPlay is one of the most convenient methods, we have many other alternatives if it doesn’t work for you. If you face an issue with any of the steps mentioned earlier, do let us know in the comments below, and we’ll help you soon.

How do I connect my MacBook to my Sony TV wirelessly?

Can you mirror a Mac to a Sony TV?

Yes. While Apple AirPlay is the best solution, not all TVs support it. AirBeamTV, Just Stream, and MirrorMeister are examples that allow you to mirror a Mac to a Sony TV.

Can You Connect iMac To Tv Wirelessly?

How do I share my Mac screen with my TV without Apple TV?

You can share your Mac screen with your TV using Apple AirPlay, Just Stream, AirBeamTV, MirrorMeister, or other screen mirroring services.

How do I connect my Mac to my Sony TV HDMI?