Knowing how to capture a screenshot on a Mac is essential knowledge for all macOS power users. If you consider yourself to be one or would like to join their ranks, then you need to read this article from start to finish because we’re going to get you up to speed on screenshotting on a Mac.

The Best Ways to Take a Snapshot on a Mac

In this part, we’re describing the most popular screenshotting methods to give you plenty of options to choose from, from straightforward key combinations to sophisticated screenshot software that goes well beyond basic screen capture on a MacBook, Mac, or iMac.

Note: As you follow our instructions and try different Mac commands for screenshotting, you may discover that some apps, such as the Apple TV app, don’t allow you to take a screenshot of them. Don’t worry: it’s not your fault that screenshots on your Mac are sometimes not working. It’s just that some apps restrict screenshots for privacy and security reasons, while other apps don’t.

macOS may be known mainly for its intuitive, polished user interface, but the operating system also deserves praise for its extensive hotkey support. Most common actions can be quickly accomplished with a few key presses, and the same goes for taking screenshots.

Screenshot the Whole Screen on a Mac

If there’s just one keyboard shortcut for snapping a picture on a Mac that you should definitely memorize, it’s the one for screenshotting the whole screen.

Screenshot a Portion of Your Screen

Sometimes, it’s useful to capture only a small portion of your screen and leave out the rest. Once again, this can be accomplished with a simple keyboard shortcut.

Screenshot a Window on a Mac

While you can technically screenshot a single window using the above-described key combination, you can make your life a lot easier (and save a bunch of time) by learning one more command.

Do you have a MacBook Pro with a Touch Bar? If so, then you can use the following key combination to take a screenshot of whatever your Touch Bar is currently displaying.

Option 2. Use the Screenshot Tool

If memorizing a bunch of keyboard shortcuts isn’t your thing, then we have good news for you: all Macs with macOS Mojave or newer come with a free built-in screenshot tool that provides a user-friendly GUI that lets you activate all macOS screen capture methods with a simple click, as well as access a bunch of extra options.

The tool is called Screenshot, and here’s how you can access it and use it:

If the Screenshot tool doesn’t meet your needs, then there are many free alternatives for you to explore.

How often do you take screen captures on your Mac or MacBook? More than once a day? If that’s the case, then you should consider professional screen capture software.

Why? Because applications like Snagit go well beyond what the Screenshot tool in macOS can do, offering a wealth of features to help you capture your screen, add additional context, and share your screenshots with others. 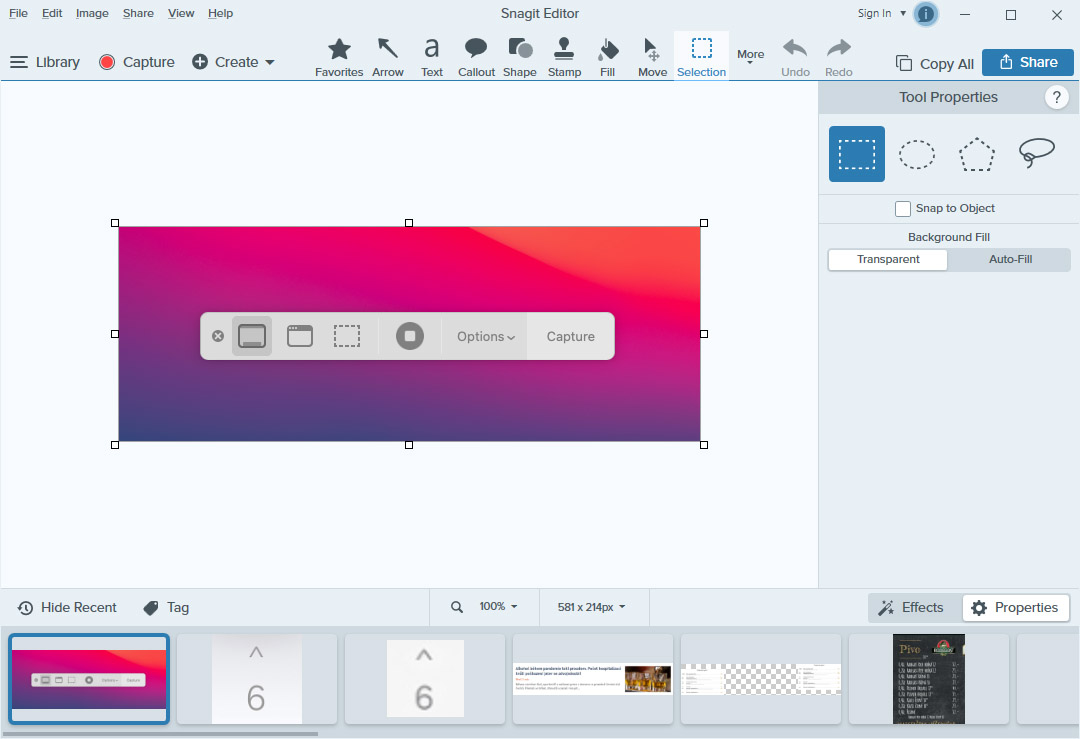 Here are just a few features that make Snagit an excellent choice for all serious screenshotters:

As you can see, Snagit offers many great features, and you can test how they work without spending a single dollar by downloading the free trial version from its website.

Where Are Screenshots Saved on a Mac?

You wouldn’t be the first Mac user to screen capture on a MacBook or Mac, only to wonder where the screenshot is saved.

Counterintuitively, macOS doesn’t save screenshots to the Pictures folder. Instead, by default, screenshots are automatically saved to your desktop. 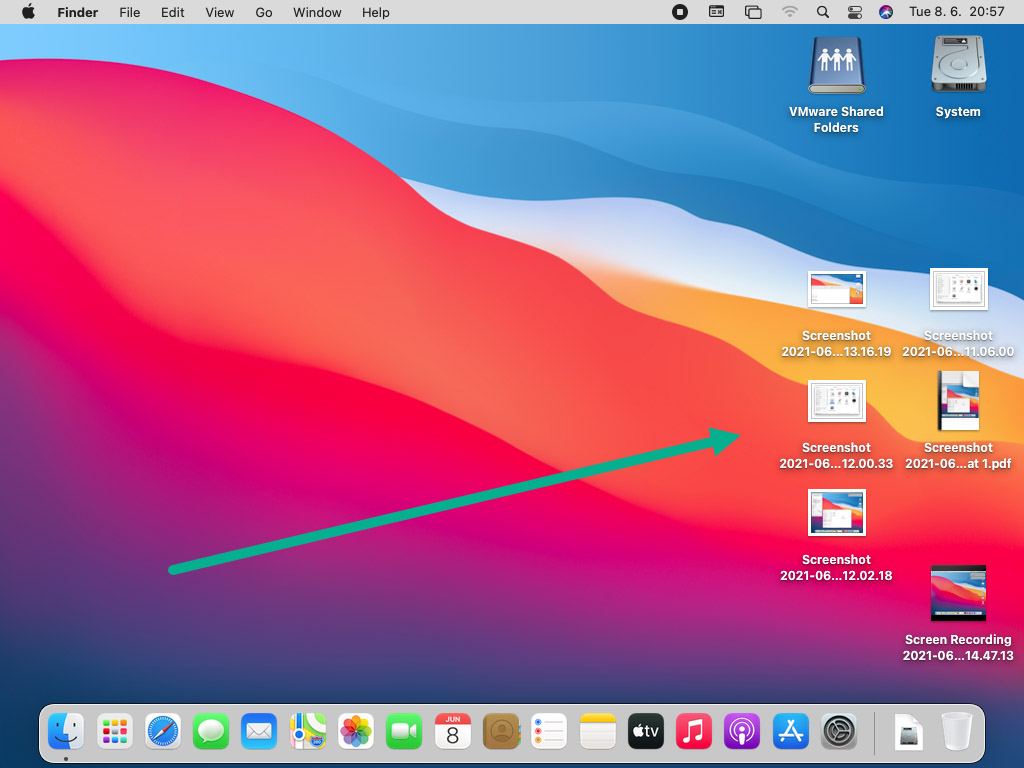 You can, of course, manually move them to any folder you want, but it may be better to change the default location where screenshots are saved instead, which is easy to do.

How to Change Where Screenshots Are Saved on a Mac?

On macOS Mojave or later, you can change the default screenshot location directly from the Screenshot tool:

Alternatively, you can change the location of screenshots on your Mac from Terminal:

How to Copy the Captured Screenshot?

Even with the default screenshot location configured exactly according to your preferences, you may sometimes want your Mac to save screenshots to a different folder. To do just that, follow the steps below:

To copy a screenshot to the Clipboard, press and hold the Control key while you take the screenshot. You can then paste the copied screenshot anywhere you want using the Command + X shortcut.

How to Edit Screenshots on a Mac

To edit screenshots on your Mac, you don’t need to download a dedicated graphics editor like Adobe Photoshop, GIMP, or Photoscape X. The Preview app, which is the default image and PDF viewer of the macOS operating system, comes with all the essential editing tools you need to annotate and otherwise customize your screenshots.

Draw on Screenshots on a Mac

When we say “draw,” we mean everything from using the pen tool to underline important text to adding arrows to draw attention to important elements to including short text explanations.

All this and more is easily possible using the markup tools included in the Preview app. Here’s what you need to do to access them:

It goes without saying that the screenshot editing capabilities of the Preview app are nowhere near as extensive as, let’s say, Photoshop’s, but all the basics are covered quite well.

After adding annotations, cropping and resizing are probably the most common editing operations applied to screenshots, and the Preview app supports them both.

To crop a screenshot on a Mac:

To resize a screenshot on a Mac:

Save a Screenshot in Different File Format

There are many different image file formats, and they all have their advantages and disadvantages. When it comes to screenshots, the two most useful file formats are JPG and PNG. Let’s take a quick look at their main characteristics:

Both JPG and PNG are supported by macOS Ventura, and you can save a screenshot in any of them using the Preview app:

By default, Mac screenshots are saved in the PNG file format, but you can switch to the JPG file format by entering following command in Terminal:

Just know that you may need to restart your Mac for the command to take effect.

Combine Screenshots into One PDF

Sometimes, it might be handy to combine multiple screenshots into a single PDF file. While this may sound rather complicated, the reality is that it’s anything but that thanks to a handy shortcut present in macOS Ventura. Here’s what you need to do:

A new PDF file will appear right next to your screenshots, displaying one screenshot per page.

Is It Possible to Take Video Screenshots on a Mac?

Yes, it’s not only possible to take video screenshots on a Mac, but the process is also straightforward. Best of all, you don’t even need to download any third-party software since screen recording capabilities are included in the Screenshot tool.

To take a video screenshot on macOS Ventura:

Similar recording capabilities are present in other screenshot tools, including Snagit, which we’ve described earlier in this article.

How to Take High-Resolution Screenshots on Mac?

It’s only natural that you want your screenshots to be as beautiful as possible, and their resolution plays a huge role in their overall appearance. Here are some tips to help you take high-resolution screenshots on your Mac:

As you can see, there are several tips and tricks that you can use to increase the size of your Mac screenshots, so go ahead and experiment with them until you’re satisfied with the results.