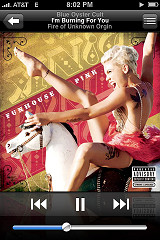 I don’t use my iPhone much as an iPod since I have a 30GB iPod, but I was using it the other day and came across a very interesting bug. Now, this could entirely be just isolated to my iPhone, but I’m not sure. It seems that some of the album art for the songs on my iPhone are completely wrong. It seems as though there is a mapping error on them.
Here are a few examples: I know it’s not entirely wrong, since the podcasts do have the proper album artwork, as shown below. I also know that it’s not embedded within the mp3, because I do not have this problem on my iPod at all and there is overlap between my iPod and iPhone and they both are synced with the same library. I don’t know if it’s just something within my iPhone’s iTunes database that’s gotten corrupted, or whether it’s something actually wrong with my iPhone itself. Or whether there is a memory module that is starting to fail, I’m not sure.

There is a fix for this. You have to remove all of the songs on the affected album from the iPhone and then re-sync those songs. This will re-sync the proper artwork. Now, some will think well, yeah, that’s not that too difficult. No, it’s not, yet there is no reason why this should be happening at all. Now to spend the time fixing all of the songs.

If you’re having the same issue or know of an alternative fix leave a comment.