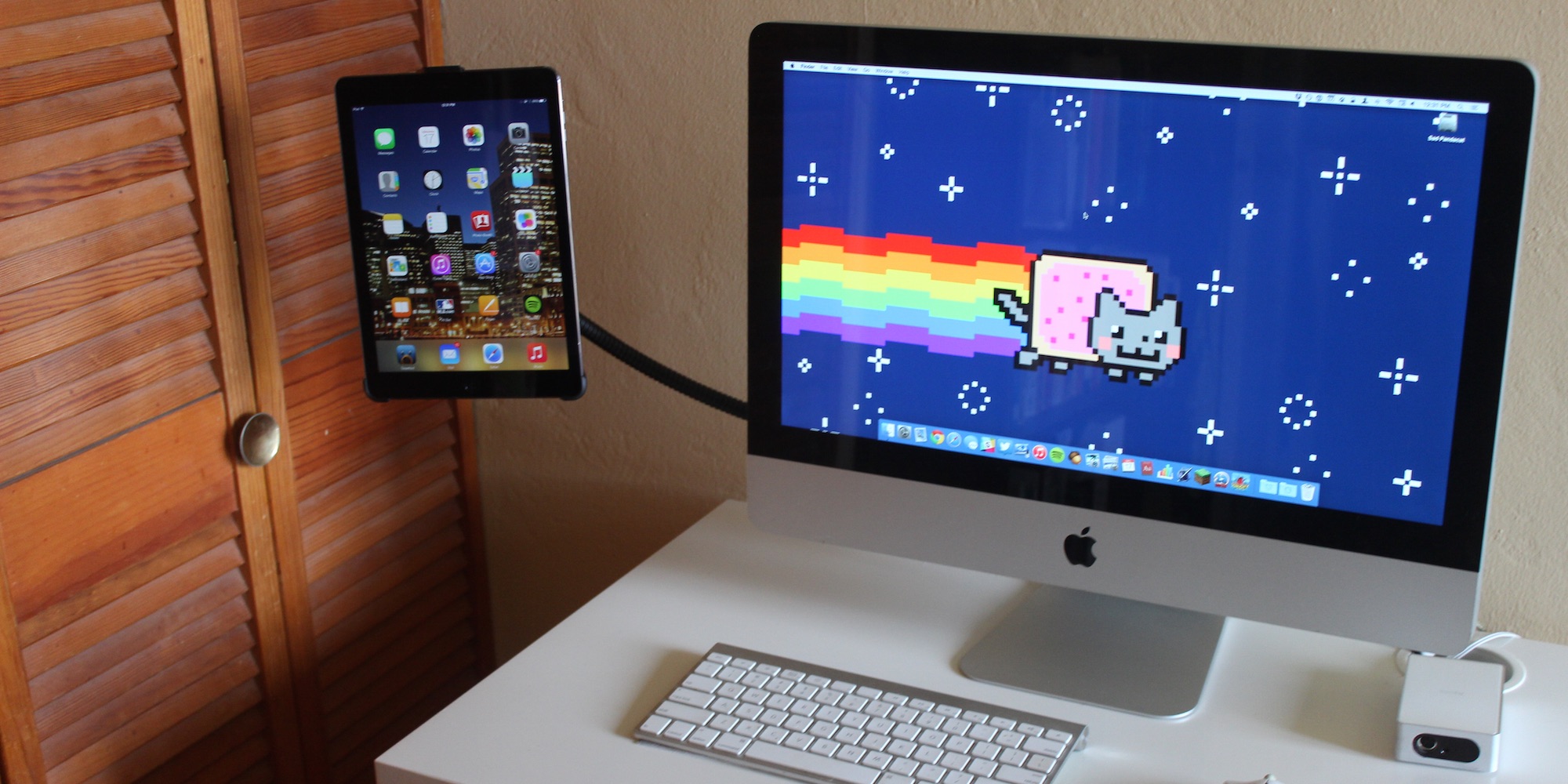 My home is all of about 600 square feet. So instead of a proper workspace, I have a small Ikea computer desk that sits in a corner between my closet door and the foot of my bed.  It’s a tight squeeze, so every square inch of desktop space is precious, and anything that can help me make the most of the space I’ve got is a win in my book. It would seem that Twelve South made the HoverBar 3 for people like me.

The HoverBar is a cradle-and-arm assembly for your iPad 2 or later. You attach it to your iMac’s foot—or to a desk or countertop surface—and click the iPad into its cradle, and it’ll make your iPad “float” in midair. It’s a clever idea, and a well constructed accessory for your iPad. What’s good: Good build quality. Clever concept.
What sucks: Some assembly required. A few design annoyances.
Buy it? If you’re a heavy iPad user and are looking for a stand that conserves valuable desk space, the Hoverbar 3 is worth a look. But at $100, it isn’t cheap.

The HoverBar comes in a sleek, heavy-duty box that contains high-grade packaging materials. Although the packaging is a small and insignificant thing in the big picture, it shows that someone cared enough to sweat the details.

Once you open the box, though, you’ll find out that you need to assemble your HoverBar. Assembly requires three basic steps: Attach the desktop clamp, attach the appropriate cradle (which Twelve South calls “clips”) for your model iPad, then mount the assembled unit to your desktop or to the base of your iMac or 24-inch Cinema Display. Assembly is fairly straightforward, though, so long as you follow the included instructions.

To mount the HoverBar, you’ll need to use an (included) Allen wrench to secure it to your iMac or desktop. It’d be great if the HoverBar used a thumbscrew instead since the Allen wrench is a little difficult to maneuver in the tight space under an iMac. I suspect Twelve South took this approach so you could better secure your HoverBar to your desk—you can get more torque with an Allen wrench than you could with your fingers, which means a tighter, more secure grip.

But a word of caution: If you own one of the “slim” 21.5-inch iMacs that Apple introduced in late 2012, Twelve South advises against attaching your HoverBar to your iMac’s base. These newer models are too light to support the added weight of the HoverBar and iPad, so it might tip over. The 27-inch models support the HoverBar just fine, though.

The Hoverbar is solidly constructed by and large: The arm and the bracket are made almost entirely of metal, and they feel hefty and durable. The iPad clips, however, are made of flexible, lightweight plastic, and feel flimsy compared to the metal components. A heavier, stiffer plastic clip would make it more difficult to slip the iPad in and out, though, so it makes sense that Twelvesouth went with a flexible plastic here.

I mounted the Hoverbar to my iMac, and for the most part, it works well. The flexible arm was a little stiffer than I expected, which made it difficult to precisely adjust it one-handed. I was able to slip my iPad Air into and out of the clip with ease, and once it was in the HoverBar’s clip, my iPad felt like it was securely mounted—I never worried about my iPad somehow sliding out and dropping onto the floor. The clip itself felt a little loose where it mounts to the arm—it never felt like it would slip off, mind you, but it wiggled more than I would’ve liked. Despite these gripes, though, the good definitely outweighs the bad.

As for use cases, well, I’ll be the first to admit that I’m not a serious iPad user. My iPad Air gathers dust most of the time, and if it weren’t for the fact that I need to be able to write about the thing, I probably wouldn’t have bought one. I just never fully integrated the iPad into my workflow. With that in mind, I actually found little use for the HoverBar when paired with my iMac.

But the beauty of the HoverBar is that you aren’t limited in how you use it. Twelve South mentions using it in the kitchen, or even mounting it above a bed so you can watch videos before you go to sleep. I found that it works surprisingly well as a standing desk of sorts for your iPad. And I could totally see the HoverBar used as part of an iPad-based point-of-sale system at a checkout counter. So even if the idea of having an iPad mounted alongside your iMac doesn’t appeal to you, you might find another purpose for it.

Still, given how little I use my iPad, the HoverBar isn’t for me. And with a price tag of around $100, it likely wouldn’t be a worthwhile purchase for light iPad users. But if your iPad is a major part of your digital lifestyle, and if you’re looking for a solidly constructed cradle for your tablet that doesn’t take up much room, look no further than the HoverBar 3.