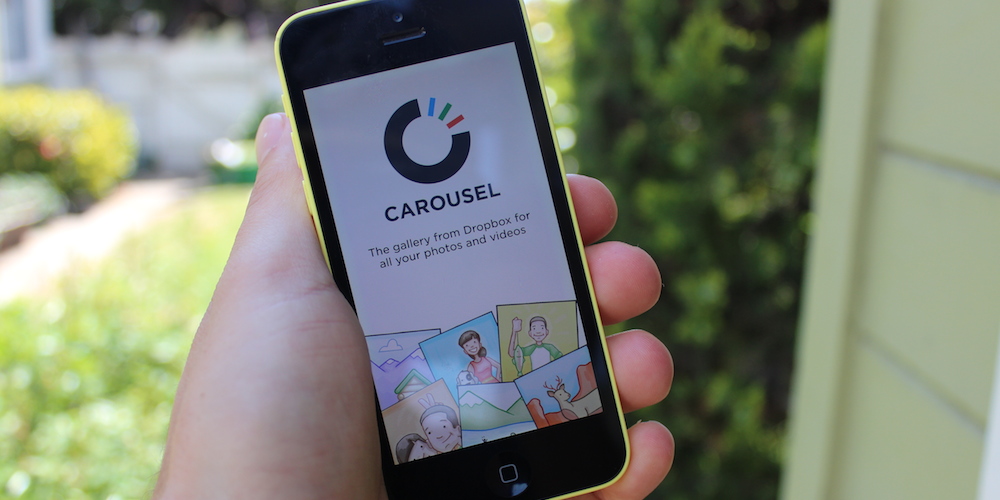 If it hasn’t been obvious enough to you by now, Carousel from Dropbox makes it absolutely clear that the company sees itself as something more than a data storage service. Carousel, a new app for iOS, is part photo viewer, part photo sharing tool, and while it seems to do a good job in those areas based on my hands-on time with it, it likely won’t pull you away from more full-fledged photo management apps. At least not yet.

Carousel, a free download for iOS 7.0 and later, pulls in photos from your iOS camera roll, and syncs them with your Dropbox account. By default, the app syncs over Wi-Fi, but you can set it to sync over a cellular connection too if you’re OK with eating up all your monthly data allotment. As you take photos with your iPhone, Carousel will back them up to your Dropbox as you go along, so you don’t lose a thing. The main screen shows your photos in a grid and categorized by date—a bit like iOS’s built-in Photos app. Unlike iOS’s Photos app, it groups photos strictly by date, so you can’t group photos from your vacation together. You also can’t create albums, so it’s a bit limited from an organization standpoint. A dial-like slider on the bottom of the screen lets you scan through your photos in a hurry, though, which makes up for the lacking organization features to some extent.

Sharing photos is a snap with Carousel. Tap a photo to view it as you normally would, then swipe up to add it to a sharing “shelf.” You can add as many photos you want to this shelf—just flip through your photos and swipe upward on the ones you want to share. Once you’re done, tap Share. Instead of a traditional email-like sharing interface, Carousel’s looks more like a text messaging app: Type who you’d like to share photos with, add a message, then share away. The other person can send photos to you in response (or send a text reply), and you can add those photos to your Dropbox as well.

The sharing features take a little getting used to. I’m used to swiping upward to dismiss an image in Tweetbot, so I have to remind myself that Carousel behaves a little differently. Still, it works reasonably well and is easy to use once you figure out its quirks.

Carousel lacks any sort of photo editing features, though: No color adjustment, no red-eye removal, no crop tools. If you rely on those sorts of features, you’ll have to rely on another app in addition to Carousel. And as far as I can tell, photos you upload to your Dropbox from your computer don’t appear in Carousel. It doesn’t seem to be much of a stretch to think that these sorts of features may appear in a future version of the app.

In all, Carousel 1.0 is a good start, and like every 1.0, what’s missing is as notable as what’s there. Still, if you’re a heavy Dropbox user, it’s worth taking for a spin.