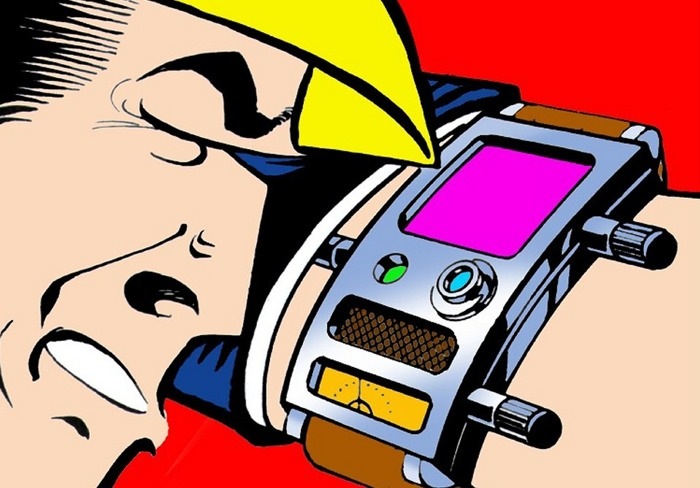 Some things are just too predictable. When rumours were flying earlier this year about Apple’s mythical smartwatch, Samsung went on the record as saying they were planning one too. As if simply thinking about making one makes a company innovative.

However, minus an Apple i-product to copy, what was Samsung going to come up with?

The most obvious thing clearly.

The Samsung Galaxy Gear Smartwatch is pretty much exactly what you would expect when you say the word “smartwatch”, if that is actually a word now, I’m sure Oxford will be on that soon.

The inspiration for this futuristic piece of wearable technology can be seen as far back as Dick Tracy in the 1940s and as recently as a successful Kickstarter project called the Pebble. In other words, this is a slightly refined, feature-packed version of the smartwatch everyone already knows.

And what of those features? It seems Samsung is going for as many checkboxes as possible as they crammed a camera, a 1.63-inch touchscreen, speakers and a microphone. It still requires a smartphone to operate, but Samsung has clearly tried to cram as much of the Galaxy S smartphone into this watch as possible.

Of course the idea of a camera on your wrist is more useful on the side of a box than it is in real life.

Here’s a real life experiment: Pretend you have a camera on your wrist, now try to take a picture of a fictitious walrus eating an ice cream sandwich right in front of you without looking like an idiot. Did you end up with a hybrid of Walk Like an Egyptian and Power Rangers? That is apparently the look Samsung is going for.

This is another perfect example of choosing the what ahead of the why, technology over use case. To be fair, the Android world, having seen the tremendous success of iOS gesture controls, has recently embraced the idea of absurd, non-intuitive gestures. With head shakes and wrist twists that are only a few steps removed from the Humpty Dance.

So we have a watch James Bond would love, live videoconferencing with M, but no laser cutter though.

But is that what consumers want?

Samsung will likely sell a few million of these, if the orders for Pebble are any indication, but how does this watch solve a problem consumers are facing in an elegant, easy and unobtrusive way?

I have no insider sources at Apple, I can’t even cut in line at the Genius Bar, but if I had to guess, I would say the Apple iWatch will be to a watch what the iPhone was to a phone – something we’ve never really seen before.

If I have to carry a smartphone around anyway, why do I want to replicate the functionality of a device that is a foot away in my pocket? The purpose of a smartwatch should be to augment your smartphone and to provide easy access to notifications, not conduct a video call with your boss looking like a crazy person. Talking into your wristwatch makes Google Glass look normal by comparison, if the prize here is for most awkward use of technology, Android is running the table.

If I were to prognosticate, I think we’ll see something closer to a FuelBand/Jawbone Up hybrid, with sensors and a discrete LED powered notification system, than a mini iPhone screen bolted on the front of a watch strap. Unlike a smartphone, which can be hid in a pocket, purse or covered with a case, a watch is out there, a fashion accessory as much as it is a computer. With that in mind, how many women can you see wearing this? How many men for that matter? We’ve already seen the lengths to which people will go to make their smartphone fashionable, do we really think a big, bulky homage to the 80s Casio calculator watch is going to sell to mainstream consumers?

Sure the iPod Nano had a neat phase as a similar big bulky smartwatch, but that was an off-label usage that caught on in tech circles, not a mainstream trend. Kickstarter campaigns do not represent mainstream trends.

At the end of the day, the only way wearable computing ever goes truly mainstream is if it’s fashionable, unobtrusive and doesn’t make me look like an idiot while using it. Remember how popular Bluetooth earpieces used to be? Where are they now? Largely gone because wearing one immediately identified you as a self-absorbed douche.

So while geeks will undoubtedly be hot and bothered over the possibility of command line access to their FTP server on their wristwatch, this is not the smartwatch you are looking for if you think Ruby on Rails is a drink with cranberry juice.

I’m not convinced that “smartwatch” is even the right name for the type of device Apple will introduce. Sure it will probably show you the time, but the paradigm of the watch is too constricting to allow for true creativity. If you’re thinking smartwatch then I’m sure something like Samsung has introduced is perfectly acceptable. If you’re thinking about how wearable computing can be something much more than another way to check your Twitter feed and send an email, then the possibilities are much greater.