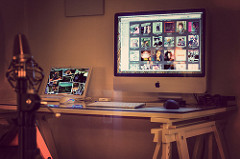 Everyone has been lamenting the fact that Apple has decided to call it quits on Macworld.Â  No one really knows why, but I have a sneaking feeling that it has a lot more to do with release schedules than it does anything else.

Macworld has become a Mecca for Apple fans, and the hype seems to growÂ  every single year.Â  Pressures mount, and product releases have become expected at every single event.Â  Media and consumers freak out that Macworld events were letdowns no matter what Apple releases, stock continually takes a post Macworld plunge, and Apple is feeling the continued pressure of focusing their release schedule around an expo more than it is around products being finished.

Does it come as any surprise that on the heels of failed product releases, and mounting pressures for bigger and better products every year, that Apple has decided to take a step back from the event?Â  Apple needs to get its own house in order before it can put those products into anyone’s house.Â  It’s smart business.

I’m not saying that Apple’s house is in disarray, but what I am saying is that Apple might be making a move to ensure that products are polished before they decide to announce them to their demanding customers.Â  Without the spotlight of Macworld looming every year Apple can begin to operate on Apple’s timetable, and not a consumers.Â  I can’t fault them for that, and I certainly won’t hold it against them if it means that we get more of the flawless and great products that we’ve grown accustomed to previous to the last two years.