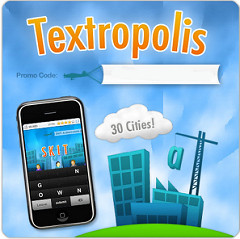 I received an interesting email a couple days ago. It was from Ian Marsh, the creator of the popular word game, Wurdle.Â  Correction: Semi Secret Software is the creator of Wurdle. I apologize for the mistake. (WD-01/20/09). It contained a free code to redeem a copy of his newly released game, Textropolis. At first I thought the email was actually spam. Given the phone, and ‘web 2.0’ look of the email. But after looking at again, I figured out what it was. As you can see below. I had some time last night to sit and play it. I must say, I think I might like it better than Wurdle. The concept of the game is quite simple. You are given a city, the first one is Kingstown. The whole idea of the game is to get any many words as possible out of the city name given. Once you hit a certain threshold (10%) you unlock the next city. There are 30 cities to try. Once you unlock a city, you can leave your current city and go onto the next one. You can always return to see if you can find the rest of the words in that city. The minimum world length is four, which is a good thing, since it adds a bit more difficulty to the game. As you get more words, the population of the world increases (as of right now mine is at 119,370).

I do have a suggestion for improvement. I’d like to see more difficulty, not as in words, but as in more percentages needed to progress, along with higher returns. I’d also like to see a sequel with even more cities. If you head over to Ian’s website eenmachine.com you can get even more information about it, and links to other games.

What would most pay for this game? $4.99? $3.99? $2.99? Well, it’s a whole 99 cents. So, who are you kidding, go and pick it up from the iTunes Store. I also recommend checking out the website and youtube video for Textropolis. I’d recommend this game for any ‘word’ junkie out there.