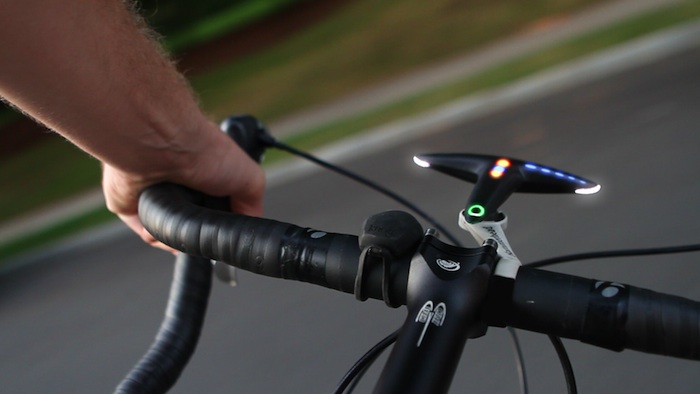 Cycling in urban environments is fun, but sometimes it can be a bit tough to remember your route to a location. This causes many of us urban cyclists to either rely on distracting iPhone mounts or simply pulling-off to the side of the street to use our iPhone’s GPS when we get lost en route.

The folks at Hammerhead Navigation have developed the Hammerhead: a safe, minimalist cycling navigation system that eliminates the need for an iPhone mount.

The Hammerhead is a small, uniquely styled device that mounts to the top of your bicycle’s handlebars or stem.On the top of the device is an array of LED lights that are used to tell you which way to turn, the distances to your turn, road hazards and other information on the fly.

These lights can be seen in your peripheral vision and aren’t distracting like a smartphone screen. The LED lights display information taken from Hammerhead’s iPhone app that connects to the Hammerhead by way of Bluetooth.

For added visibility, the Hammerhead also has a forward-facing light for midnight rides.

If you’d like to preorder a Hammerhead for your bicycle, expect to drop $75. The company also offers a bike share mount to work with Chicago’s Divvy Bikes, New York City’s Citi Bike, and other bike share systems for an additional fee. As of now, the Hammerhead has reached its $14,500 funding goal with four days to spare, so get your preorder in ASAP!