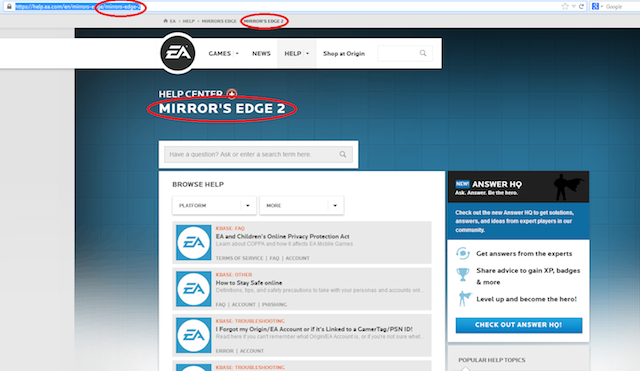 Gamers will be happy to hear that a working Mirror’s Edge 2 help forum page appearing on EA’s official website today. The page has since been taken down, but I think it’s safe to assume that Mirror’s Edge 2 might be making an appearance at this year’s Electronic Entertainment Expo (E3).

The page was discovered by ekim over on NeoGAF, who so kindly took a screenshot of the page for everyone’s viewing pleasure. It was probably an accident on EA’s part. The company usually creates pages like this for announced, upcoming and current games, but since Mirror’s Edge 2 hasn’t been released yet, much also even announced yet, EA probably didn’t take the page live intentionally.

This is by no means an official announcement for Mirror’s Edge 2, but it definitely makes the rumors much more believable that the game will make its debut at E3 2013.