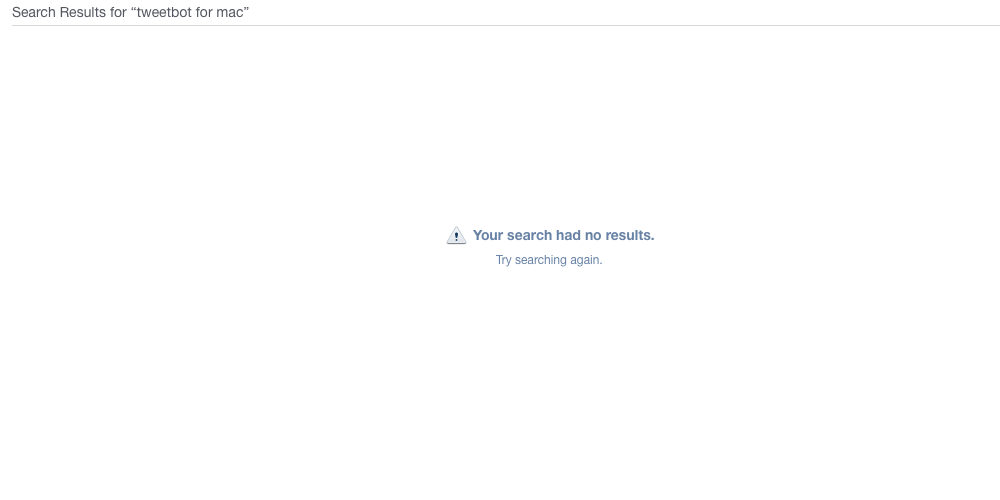 Hopefully I didn’t spread any negative karma last week, but Tweetbot for Mac may or may not be doomed, and it may or may not be Twitter’s fault. Let’s break this down before it #gates. We’ll try to keep this updated if need be.

The Word On The Street

Who’s Behind The Gossip?

Where You Heard It From Because It’s Now ‘News’:

Actual Thing That Happened On Which Reports Are Based:

Tweetbot for Mac is currently unavailable in the App Store. There have been reports—that is, Twitter search results—that users are unable to authenticate new accounts.

There is actually a Real™ Twitter token limit for third-party developers, which effectively limits how many people can actually use any given third-party Twitter client. There’s no obvious, simple answer to why the app would be pulled from the store besides ‘we’ve hit our token limit and if you pay us $20 for this you might be pretty upset when it doesn’t work’. The authentication issues are similar to those reported by now defunct apps that have hit their token limit. No other Mac client developer is reporting similar issues that might indicate it was a problem on Twitter’s end.

Tapbots has publicly stated that it’s working with Twitter to resolve the authentication issues and hopes to have Tweetbot back in the App Store soon. Nobody involved has actually invoked token limits as the source of the issue. The authentication issues seems to be resolving, then reoccurring, the resolving, then reoccurring, indicating something else might be the cause. We probably would have heard sooner from Tapbots had they been approaching their user limit. Likewise, it’s unlikely they wouldn’t have noticed their token usage evaporating overnight. In fact, a Tapbots developer is pretty sure it isn’t token limits.

Short Term: Should I Be Worried?

Not really. Judging from the way Twitter cares about its own Mac client, there probably aren’t too many of us who care in the first place. If you already use Tweetbot for Mac, life is peachy. None of this affects Tapbots’s iOS apps. But perhaps you shouldn’t hold your breath about a Tweetbot 3 for iPad update.

Long Term: Should I Be Worried?

Nothing better expresses planned obsolescence like third-party Twitter clients. Even if it hasn’t hit its token limit yet, Tapbots will eventually reach it, and development will probably stagnate as a result. The token limit is already affecting development of other popular 3rd party clients. Best case scenario is that we’ve all moved on from Twitter by the time it happens. Otherwise? Resistance to Real™ Twitter is Futile.