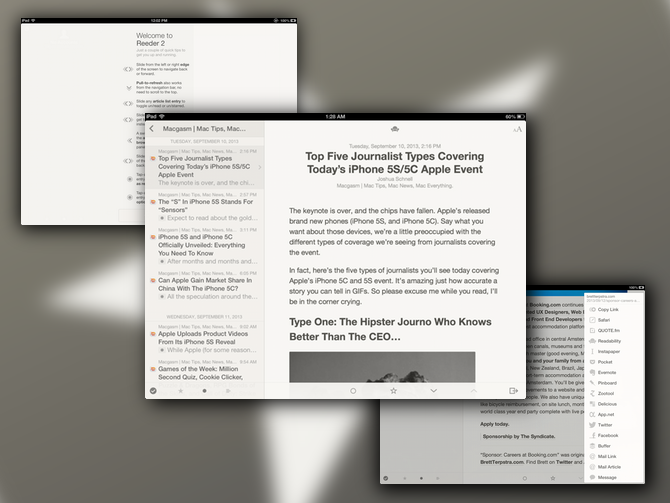 Reeder was the Google Reader client to beat on OS X and iOS until Google Reader died. (You Mr. Reader people are just weird, sorry.) When Google Reader was shuttered earlier this year, Reeder users on an iPad or Mac were left without their RSS reader of choice. But the iPhone app was updated with Feedly and a few other services, a small consolation. Now, Reeder 2 is here, and it’s a real update to the app. It’s universal on iOS, and has some serious interface tweaks in addition to the new services. This update is ready for iOS 7 and was well worth the wait.

Though obviously the wide array of RSS services was the impetus for the Reeder update, its interface is likely the biggest and best feature of the new version. The app initially opens to a three panel interface, with the leftmost panel where you select services. (That’s correct, if you want to sign up for more than one RSS service, you can.) Then you get your folders, and finally your feeds. Once you click on the feed, your article list and article slide in from the right as a two panel interface. You can swipe a single finger to the left or right to move through the levels of interface; if you swipe right on an article you bring up the sharing menu as a popover. All of the traditions have extremely detailed animations, none of which slowed down my iPhone 4S, iPad Retina (1st gen), or iPad Mini. For example, the Mark All Read dialog pops up from the bottom of the screen and shakes into place. All of the animations have full motion, and will be right at home when iOS 7 comes out.

Reeder now supports, Feedbin, Feedly, Feed Wrangler, and Fever. Or if you aren’t worried about sync, you can just use it as a local RSS reader.) If you’re a Readability user, you can add your Read Later queue as well. The set up is pretty painless, and the initial sync is surprisingly fast, though that may depend on the service. My testing was done with Feedly. You can now add new subscriptions via Reeder, however you cannot delete feeds or edit your folders.

The sharing menu got a big overhaul as well. There is a huge list of options, and all the biggies are here. You can post to Twitter, Facebook, or App.Net. Twitter and Facebook sharing uses the iOS account, so you won’t need to set these up. You can save to Pocket and Instapaper, or Pinboard and Delicious. There’s a lot more supported here, including just emailing the whole article to someone. One of the best features is that you can completely customize this menu, hiding everything you don’t use from the menu. It’s a small detail, but it’s a nice touch that cleans up the visual clutter.

Reeder fans that have moved on to other apps are going to have a lot to come back to within this updated version. The only thing that may present a real barrier is that you’ll need to repurchase the App. You can grab it for $4.99 on the App Store. Reeder users using the OS X version are still going to have to wait for an update, according to the developer’s Twitter account, it is expected to head into public beta this fall.