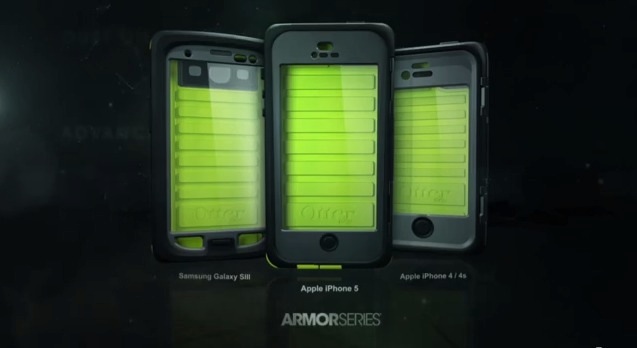 Otterbox is known for its heavy duty cases for smart phones. Otterbox offers exceptional protection for the iPhone with the cost of adding bulk to your phone. We got our hands on the recently released Otterbox Armor Series for iPhone 5 ($99.95). This water, dust, drop, and crush proof case is claimed by Otterbox to be “the toughest case ever built.”

The Armor, like the Atlas and Lifeproof, has a two piece structure. The back piece has an O-ring around the sides. The inside is lined with a silicon cushion for shock absorption. The phone fits snug into the front piece of the case and the silicon bed on the back piece of the case ensure drop protection. The bottom ports are covered with two rubber pieces with O-rings around them. What is unique about the Armor is the way case is put on to your device; instead of snapping the two pieces on to each other, there are two heavy duty metal latches that seals the case.

I don’t believe that a massive case like the Armor is meant for everyday use by the average iPhone user unless you are extremely concerned about any sort of damage to your phone. The Armor is more meant for people who have jobs that threaten the iPhone 5. This case is meant for someone such as a construction worker, not an IT specialist. Therefore, this case simply isn’t a tradeoff for the average student or office employee; it is meant for people who are either very prone to dropping their phones a lot, or people that have a profession that requires working in an environment where a phone drop is common.

While using the case for a few days, I encountered some major problems with the case itself, aside from the bulkiness. First, like the Defender series, the Armor series has a cheap plastic screen protector. The Atlas offers a glass screen protector and I can definitely notice the difference between the two. There is a significant air gap between the iPhone’s screen and the Armor’s screen, making touch screen responsiveness very poor. Another problem I faced was the firmness of the home button; it was very hard to push. Another problem with the case is the space between the front and back piece. Dirt can easily get stuck in there; I was skeptical to do a water test with the iPhone inside because I thought water would enter inside. Lastly, the camera cut out is a bit off and you can surely notice that Otterbox did a poor job in the alignment of the camera cut out in the Armor. The volume buttons and mute switch were not too hard to press.

Although the Armor offers great protection for your iPhone, I feel that there is too many design flaws in the case itself. The case adds an undesirable amount of bulk and weight to the phone. If you are looking for an ultra-rugged water proof case, I would not recommend this simply because of the flaws in the design of the case. I really recommend the Incipio Atlas over the Otterbox Armor because the Atlas offers great protection, while adding very little bulk, and a genuine feeling glass screen protector. The Armor on the other hand is simply too bulky for the average user, and takes away functionality of the smooth glass screen on the iPhone.