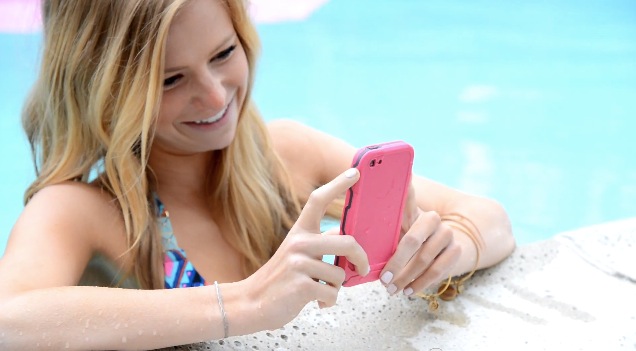 At CES in 2013, Incipio unveiled the Incipio Atlas series for iPhone 5. I just got my hands on one, and I am simply impressed by the features of this ultra-rugged iPhone 5 case. The Incipio Atlas ($89.00) offers water, shock, and dust protection. This isn’t the first water proof case ever made for the iPhone 5. The Atlas is available in 4 colors. Lifeproof had their Fre case to offer for water proof protection as well. However, the build quality and features of the Atlas are far better than that of the Lifeproof.

Putting on the Atlas isn’t a struggle. It is a two piece case like the Lifeproof and Armor, however, it feels much sturdier than the two. One unique feature that is nice in the Atlas is the lack of O-rings. The inner side of the back piece is made of rubber, ensuring that water does not enter inside the case. There is a plastic piece that latches open and covers the bottom of the device. Opening this piece is quite a struggle but the tightness ensures that water will not enter the speakers, lightning port, headphone jack, and mic. A rubber piece is used to put inside the headphone jack to ensure further protection from water.

After spending a few days with the Atlas, I don’t think I will be using any other water proof case. One of the killer features of the Atlas is its glass screen. Incipio has exceeded all the other water proof cases because unlike Lifeproof and Otterbox, Incipio has built into the Atlas a tempered glass, with exceptional responsiveness. There is absolutely no air gap between the device’s screen and the Atlas’s screen. After using the Otterbox Defender series for quite a while now, using the glass screen on the Atlas feels perfect. It feels the same as the iPhone’s actual screen. This is one of the main reason the Incipio Atlas beats the Lifeproof and Otterbox Armor. The Atlas is thinner than the Otterbox Armor, but slightly thicker than the Lifeproof. The buttons and ports are quite simple to access and the device feels very sturdy and strong compared to other cases. The home button is easy to press and I have had no problems using the cameras on the iPhone. Another feature that caught my attention was the warranty. Incipio offers a one-year limited warranty on the iPhone AND the case. If the iPhone breaks due to water damage from the fault of your Atlas, Incipio will replace/repair BOTH the iPhone and the case. That’s an enticing feature if you’re on the fence about whether or not to trust the Incipio Atlas with your phone in wet situations.

The Atlas only has one problem that affects the functionality of the device: the sound of the earpiece and rear speaker. The sound is slightly muffled, but doesn’t completely take away the ability to use the phone or speaker.

Here’s the official specs of the Atlas:

Overall, the Incipio Atlas is definitely the best water proof case made for the iPhone 5 that we’ve tested so far. Incipio has really stepped it up in terms of the case’s features, and surpasses competitors. The Atlas will cost you $89 for the US version and $79 for the Int’l version. This is $10 cheaper than the Armor and $10 more expensive than the Lifeproof. For $10 more, you are getting a slightly thicker case with many notable features: glass screen protector, warranty on the device, sturdiness, and more. I definitely recommend the Atlas over any other water proof case I’ve used up until this point.