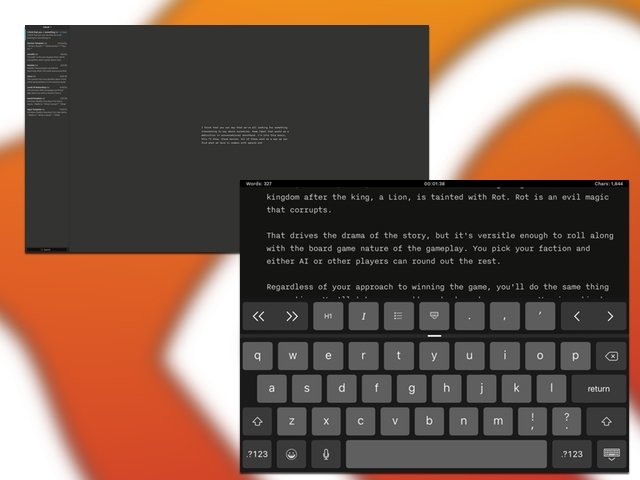 iAWriter got a big update for both iOS and the Mac recently, giving both a lot of attention. To be honest, the brought parity between the two. (They even added a Menu bar to iOS.) The apps are almost identical on the Mac and iPad, especially when in split screen app mode.

This is one of the first times I’ve seen an app be widely pared down as an upgrade. The last version of iAWriter had multiple productivity modes, which really muddled the experience. Now it is back to the main function of drafting simple text documents with good markdown support. On both platforms you swipe from the left to see your iCloud docs, and to the right to see a preview of the current document.

The syntax highlighting is meant to show you different forms of speech to assist with editing. It works well, but doesn’t give you a lot of context on readability. It isn’t as robust as Hemingway, but it will help with some basic editing. The app brings back Focus mode, which dims out everything you’re not currently working on. There’s also typewriter mode that keeps what you’re writing in the center of the screen.

What Sucks?: One font choice, even on Mac.