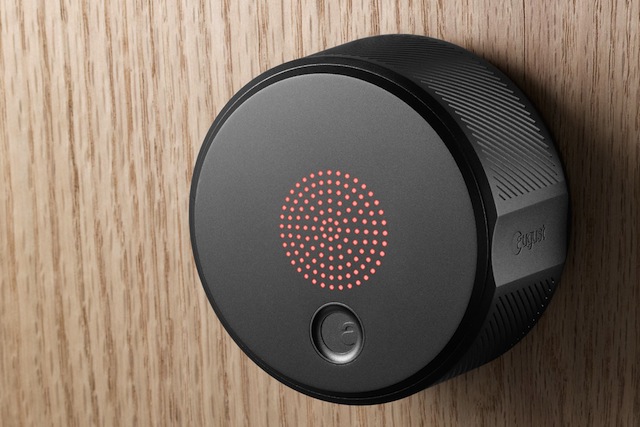 Yves Behar, the designer of Jawbone products, the Oyua Android game console, and other fantastic things, has designed the August in collaboration with Jason Johnson of Founder’s Den. The August is a new smart door lock that allows users to unlock and lock their doors using a mobile app. The device uses your iPhone’s Bluetooth chip to lock and unlock the door as you move towards and away from it. The device itself is a decent-sized black cylinder that sits where a normal door lock would sit.

The software behind the August is pretty neat. Not only does it support an iPhone app, but the smart lock also features a web interface. The web interface allows you to share digital keys and view a log of who has entered your home and at what times. Speaking of digital keys, you can send these digital keys to your friends and family members who will be visiting your home.

The August was shown off at this year’s All Things D D11 conference. During the event, Behar showed off the product in a fictitious demo. This demo showed off the use of digital keys as well as the locking and unlocking of the smart door lock. While there was a glitch during the demo, the device seems very intuitive nevertheless.

If you’re interested in purchasing an August for your home, you will be able to purchase it for $199 via the company’s website. The device itself is set to go on sale next November or December.