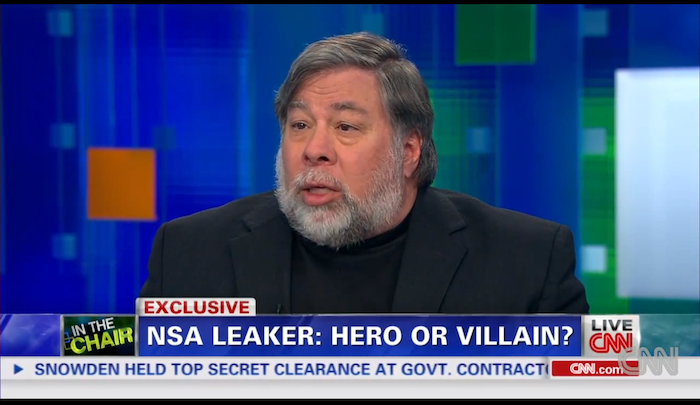 Steve Wozniak, the cofounder of Apple, spoke with CNN‘s Piers Morgan on NSA spying. Woz said that he tries to avoid picking sides on issues like these in order to focus on what really happens and then he compared Edward Snowden, the man who recently leaked NSA spying documents, to Daniel Ellsberg, the man who leaked the Pentagon Papers in 1971. Woz said that both of these leaks have “changed my life.” However, you can tell from the interview that Woz isn’t too happy about the NSA spying on citizens.

Later in the interview, Morgan exclaimed that the government wouldn’t have the ability to snoop on our private Internet usage if it wasn’t for people like Woz who created the personal computer. Woz said that he feels a little guilty but that he didn’t realize these type of consequences when creating the computer. You can view the entire interview above.

Woz said the following in the interview:

We created the computers to free the people up, give them instant communication anywhere in the world, any thought you could share it freely. It was going to overcome a lot of the government restrictions. We didn’t realize that in the digital world there are a lot of ways to use the digital technology to control us, to snoop on us.

I believe that Woz and his fellow computer engineers aren’t to blame for the United States government spying on its citizens, but i’ts the government’s fault wanting to snoop on citizens and hide it from us. If you didn’t already know, Edward Snowden is a former NSA-contracted CIA employee who leaked documents that detailed the NSA’s broad surveillance programs.