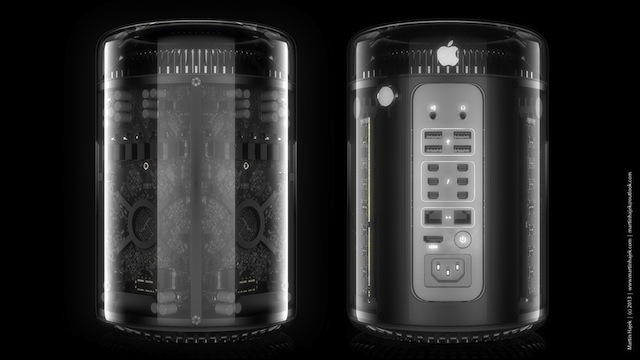 Imagine if you could see all the inner workings of your Mac Pro through a sleek glass case? If these images are anything to go by, it would actually look pretty sweet. Designer and 3D artist Martin Hajek designed a model of the new Mac Pro based on based on the transparent prototype that Apple showed off at WWDC 2013 and encased it in glass instead of metal.

While it looks great, it might not be the most practical design for what could be considered a small portable heater. Apple has included a large fan that spins horizontally on top of the circular housing that pulls cool air up from the bottom of the Mac Pro and brings it across the “cooling stack” in the middle. While the aluminium case would allow some of the heat to move out of the Mac Pro, a glass case would probably act more like a thermos, keeping it all inside.

On top of that, once the dust bunnies settle in, your Mac Pro will probably look like a right mess. Check out the rest of the photos and drool over something that just can never be.