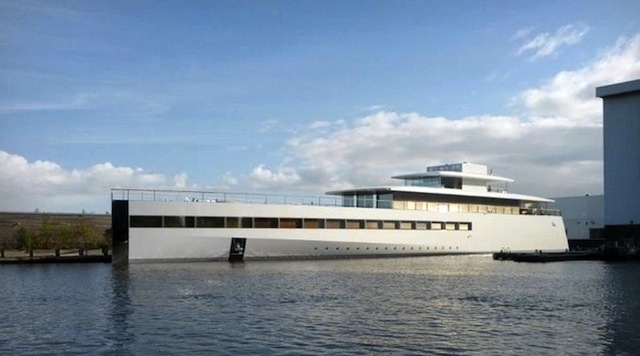 Before he passed away, Steve Jobs was working on having a huge yacht built and now, just over a year after his death, the yacht has made its first public appearance in the Dutch city of Aalsmeer in the Netherlands.

During one of his interviews with biographer Walter Isaacson, Jobs described what the yacht would look like, including a “sleek and minimalist” design. The yacht, built by the Dutch custom yacht builders Feadship, features teak decks and floor-to-ceiling glass walls in the main living areas, similar to Apple Store designs. Jobs had gotten the chief engineer at the Apple Stores to design a special glass that was able to provide structural support.

The pictures of the yacht show a couple of different angles. One shows the name of the boat, Venus, after the Roman goddess of love and beauty, while another shows the ship’s wheelhouse, equipped with seven 27-inch iMacs. According to One More Thing, the ship builders were each given an iPod shuffle with the ship’s name engraved on the back and a note thanking them for their “hard work and craftsmanship” signed “From the Jobs Family.”

Jobs’ family was reportedly there for the launch of Venus, which features a lightweight aluminum exterior measuring up to 80 meters long. You can check out the pictures after the jump.