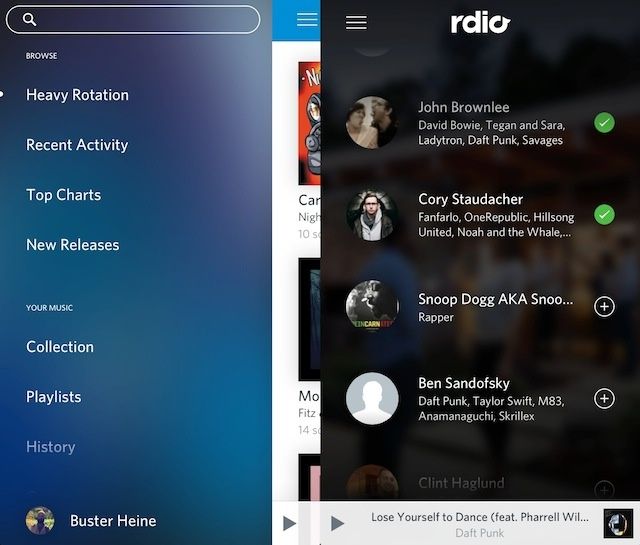 Following Pandora’s big iOS update today, competitor Rdio has come out with an update of its own, albeit more minor. The 2.2 update brings a slicker UI and a couple of other features and bug fixes to the iPad and iPhone app.

The main UI changes have taken place in the slide-out side navigation bar, which has been updated with a cleaner and nicer look. The update also brings with it the ability to search for music by record labels, in case there’s one label you find you really like the sound of.

There’s also a new feature called “Find People”, which helps make it a lot easier to find friends and artists to follow.

“Tap Find People, a new addition to the side navigation, to see a curated list of recommended friends and their music taste (based on your connected Twitter and Facebook) alongside hand-picked artists and influencers like Exclaim! and Arts & Crafts Records.”

– Find People. New feature makes following friends and artists easier than ever.
– Labels. Search for a record label to find its top albums and artists.
– Various minor bug fixes and UI improvements, including new, cleaner look for sliding side navigation.

Music streaming apps are going to have to come out with more updates than ever now if they want to stay competitive in the increasingly competitive market.