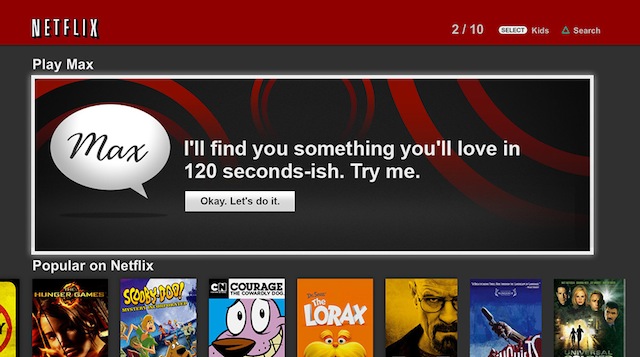 Netflix announced today that it has begun rolling out Max, your virtual guide on PlayStation 3 that helps you find something good to watch in a fun and conversational way. Netflix started testing Max out at the end of last year, and today marks the beginning of bringing him to all PlayStation 3 owners in the U.S.

Max works similarly to Siri for iOS, and is apparently “rumored to be the child of Siri and HAL 9000.” You’ll find him on the third or fourth row of the main Netflix screen on your PS3. He’ll ask a few questions about the kind of mood you’re in or the types of movies and TV shows you like and, based on that and the Netflix algorithms that predict what you’d like to watch, will come up with a few suggestions. There are a few ways Max will come up with suggestions.

Max offers something called the “ratings game,” where you choose a genre that you’re in the mood for and then rate a few titles using Netflix’s five star scale.

Sometimes if Max is feeling confident he’ll offer a fun and personalized suggestion after asking only one question. To do this, Max will ask you to pick between two very specific genres that are personalized and use the detailed tags that are available on all the shows and movies on Netflix to come up with a suggestion.

When Max is in a particularly good mood he’ll offer a suggestion without even asking a question, but it’s a mystery suggestion so you’ll have to press play to see what he comes up with.

Over the coming weeks, more U.S. Netflix users will be able to test Max out on their PS3. Depending on how well Max does, Netflix plans to expand his collection and make him available on other devices in the future, probably the iPad first. For now, though, Max will only be available for people in the U.S.