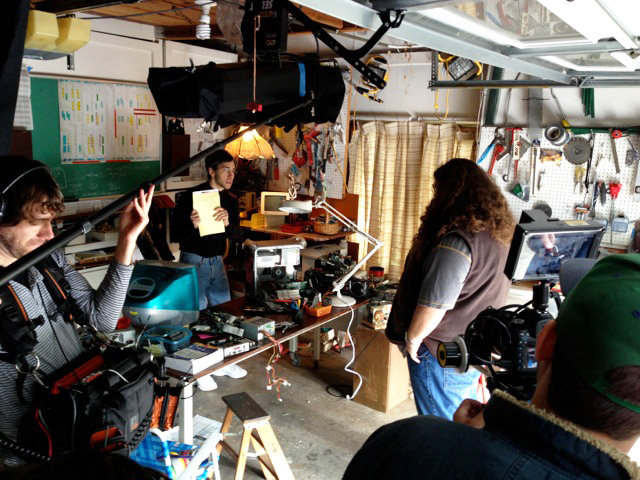 Last week, Funny or Die released a teaser trailer for the upcoming Steve Jobs biopic, “iSteve.” The trailer showed a little of what we can expect when the full-length video is released on April 15, complete with dramatics, A-list actors, and every Steve Jobs cliché imaginable. Now, Co.Create has gone behind the scenes of “iSteve” to give us all a little more of what’s to come.

Co.Create had a chance to sit down with Ryan Perez, the writer and director of “iSteve,” to talk about Funny or Die’s first feature-length video. It took only eight weeks to get the whole thing done, and it’ll be the first of three Steve Jobs biopics to be released, though the other two look to be a bit more serious take on the late Apple co-founder.

The goal was to be the first Jobs movie to debut, which means that the timeline was short and the budget tight. Perez wrote the movie over five days, using only Steve Jobs’ Wikipedia pages and various interviews as source material–he joked that “we couldn’t buy a paperback version of [Walter Isaacson’s] book; it’s not in our budget.” Filming was done over another five days, and the editing schedule was also compressed. Overall, the process of going from idea to 80-minute final cut will have taken about eight weeks.

The video is intentionally funny and inaccurate, since it’s based primarily on Steve Jobs’ Wikipedia page, but Perez says it’s not supposed to be an extended comedy sketch. “I think my hope would be that people are interested in following the story,” he explained, even though “we’re barely making sure there’s a coherent story. If we made a coherent story out of this, it’ll be a miracle. A coherent story wasn’t the highest priority.”

Justin Long, star of the long-running classic Mac versus PC campaign, will play Steve Jobs, opposite Jorge Garcia from “Lost” as Steve Wozniak.

Whatever this film turns out to be, I don’t think it’ll be short of entertainment and I’m pretty pumped to see it.