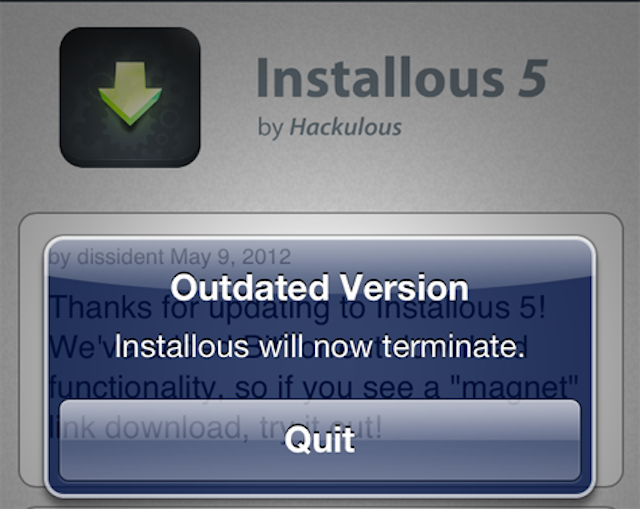 For those that don’t know, Hackulous is one of the Internet’s most well-known pirated app communities. On Sunday the site announced that it was shutting down due to “stagnant” forums and the difficulty in moderating them. With Hackulous closing its doors, its most popular apps, Installous and AppSync, will also disappear.

Here’s the message the Hackulous team left on its website:

We are very sad to announce that Hackulous is shutting down. After many years, our community has become stagnant and our forums are a bit of a ghost town. It has become difficult to keep them online and well-moderated, despite the devotion of our staff. We’re incredibly thankful for the support we’ve had over the years and hope that new, greater communities blossom out of our absence.

With lots of love,
Hackulous Team

Installous was the easiest way to get pirated apps onto a jailbroken iPhone, iPod touch or iPad. With Hackulous gone, it means you can’t install Installous or AppSync anymore, which were both needed to install the cracked apps from third party pirate sites. Since Hackulous’ announcement, the Installous app already on many devices is now completely non-functional.

Though Hackulous claims stagnant forums and the difficulty in moderating them is the reason for shutting down, people familiar with the site say it was actually healthy and still had a lot of users, so there could be more to its shutting down than Hackulous is actually saying.

With rumors that a jailbreak for iOS 6 won’t be coming, Installous, and even Cydia, won’t work on new devices, which could be another reason Hackulous shut down. Dissident, the admin for the projects, has always been an advocate of “try before you buy,” but with trials more readily available officially, Dissident may have realized his efforts wouldn’t last much longer.

Either way, Hackulous’ shutting down has come as a surprise to a lot of people who relied on Installous. It might be time to bring out that credit card for your next app, at least until someone steps up to take Hackulous’ place. Or, you know, you could spend a dollar on an application. God forbid.