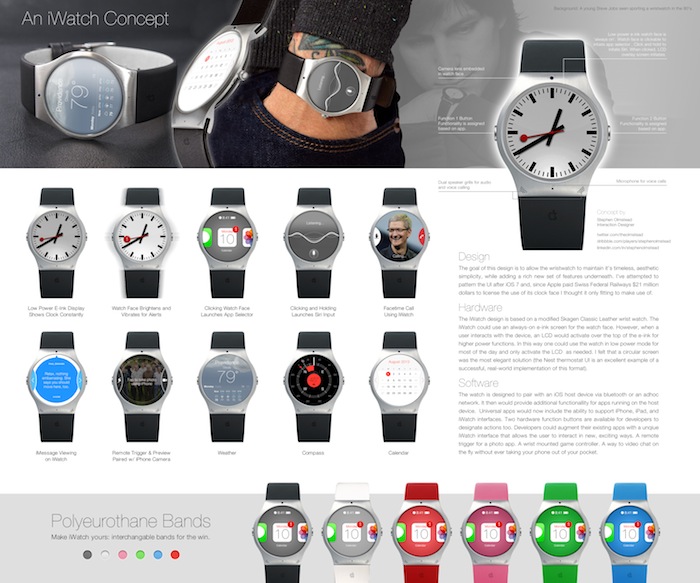 Most iWatch concepts we’ve seen over the past few months have looked, well, pretty ugly. They tend to be obnoxiously large rectangles mounted to a not so attractive wristband. However, member stephenolnstead on The Verge Forums decided to take it upon himself to craft an iWatch concept that looks like a real watch with a circular watch face. The watch is shown to offer both leather and polyurethane watchbands that would come in six different colors. The face of the iWatch is shown to have dual speaker grills, a microphone, and a camera. The watch is also shown to have both an eInk and an LCD screen for power consumption reasons. The eInk screen would be always-on, and the LCD screen would be used to display apps, etc.

The watch face displayed on the iWatch looks to be the same seen on the iOS 7 clock app. Apple licensed this watch face for $21 million from Swiss Federal Railways, so it would be interesting to see Apple put the licensing cost to good use.

Aside from a cool design, stephenolnstead’s mockup also shows a bunch of potential interfaces for the iWatch. Most of these apps, like Weather, Compass, and Calendar, look like miniature versions of their iOS 7 counterparts. However, there are also a few other features thrown in like remote shutter for iPhone and iMessage viewing.

Personally, I think this is the best iWatch concept to hit the web yet. This is due to the fact that this concept is crafted with a natural design that would fit into everyday life, not some novelty wristwatch like the iPod nano paired with a wristband.