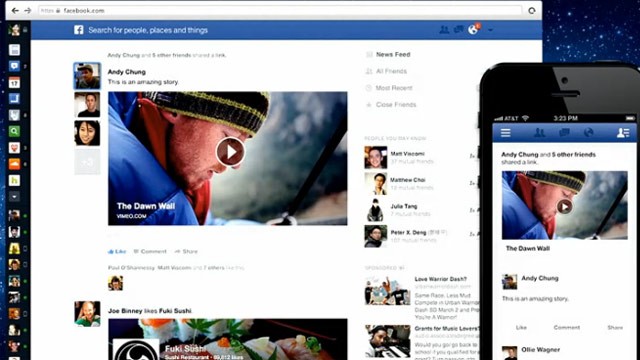 “Goodbye clutter.” That is Facebook’s tagline for the completely revamped news feed unveiled this morning at the company”s headquarters in California. The updated news feed is designed to provide a more vibrant and colorful news feed that focuses more on highlighting pictures, as well as making it easier to sort the news feed by different categories such as close friends, followers, music, photos, and other fun stuff.

One of the major goals of the revamped news feed is to get people using the news feed more frequently. Facebook said that one of the major problems that existed with the site’s old news feed was that users would only see a small slice of what their friends had done. Users would occasionally see status updates from friends they didn’t really care about instead of pictures from people they did care about. This is why one of Mark Zuckerberg’s goals with the update was to make Facebook seem more like a “personalized newspaper.” Users can now easily filter their news feeds by different topics such as photos, music and close friends, similar to topics in a newspaper.

Facebook’s decision to create a more photo centric news feed was also based on the constantly growing popularity of photos on the site. While in November 2011 photos took up 25% of users’ news feeds, in January 2013, photos had increased in popularity to the point that they were then taking up 50% of users’ news feeds. “As what we all share changes, the composition of News Feed should change as well,” said Zuckerberg.

With the update, Facebook also wanted to unify its browser website with the phone and tablet versions of Facebook. Facebook’s news feed is now identical across all devices, whether you’re viewing it on a desktop, an iPhone or an iPad. In fact, many design decisions of the updated news feed were inspired by aspects of the mobile apps.

Some users who’s accounts have already received the updated news feed have been complaining about a feature that wasn’t specifically highlighted in Facebook’s announcement. That is, massive advertisements. Since items on the news feed now take up so much space, advertisements that pop up in the news feed are of an equally grotesque size, such as this news feed featuring an ad for Rosetta Stone.

The redesigned news feed will begin rolling out to some users starting today and will continue to trickle out to other users slowly over time. If you’re interested in being one of those that gets the update sooner rather than later, you can also join a waiting list here.