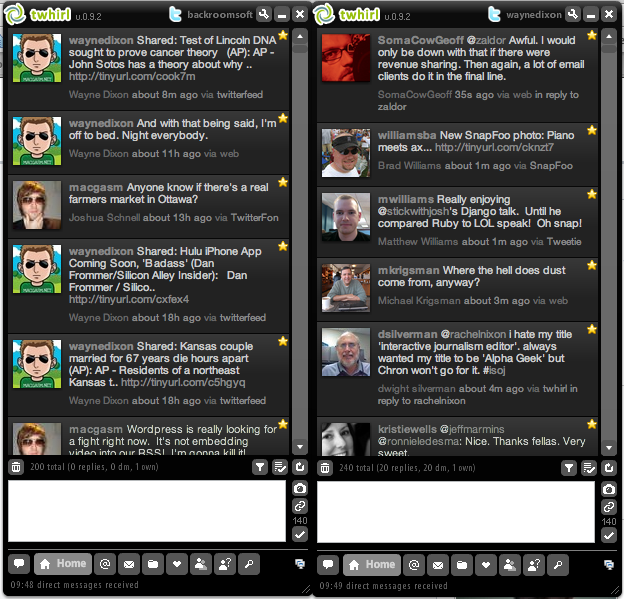 There have been a ton of questions on twitter regarding twitter clients for Mac OS X. So I thought I’d compile a list, and a brief description of each. This is by no means an exhaustive list, since there are hundreds of twitter clients available. Twhirl is one of the most popular Desktop based twitter applications. Twhirl is based on Adobe Air, meaning that it is cross-platform across Mac, Windows and Linux platforms. Twhirl is maintained and created by the folks over at seesmic. Twhirl allows a user to connect to multiple twitter accounts. This is useful if you run more than one account, like one for a business, and one for your personal twitter account. Twhirl is completely free and can be downloaded from twhirl.org. Twitterific was one of the first Mac OS X desktop twitter clients. It’s created and maintained by the guys over at Icon Factory. Twitterific is only useable for a single account, there is no multi-account support. Twitterific can integrate with growl, for new message notification. There are two versions of twitterific. The free client, which includes advertisements inline with the application. And there is the paid version, which is $14.95 and is completely ad-free. You can download your copy from iconfactory’s website. The newest twitter client is Tweetie. Just released on April 20, 2009 it features quite a bit, including integrated search, a nice UI with the ability to keep searches in a separate window, which is actively updated.
It’s created and maintained by the folks over at Atebits I don’t have a screenshot for this one, since it’s not out yet. But you can watch the preview video over at Tweetie’s website. Nambu is still in beta, but it looks promising. Much like Tweetie, it provides navigation on the left hand side. It allows for multiple twitter accounts, which is always a plus. It also provides access to identi.ca and laconi.ca based networks. It’s run by the guys over at nambu. It is still in Beta, so there are still bugs, but it’s usable. It’s free, but it could change, I don’t know what they’re plans are. You can download it directly from Nambu’s website.