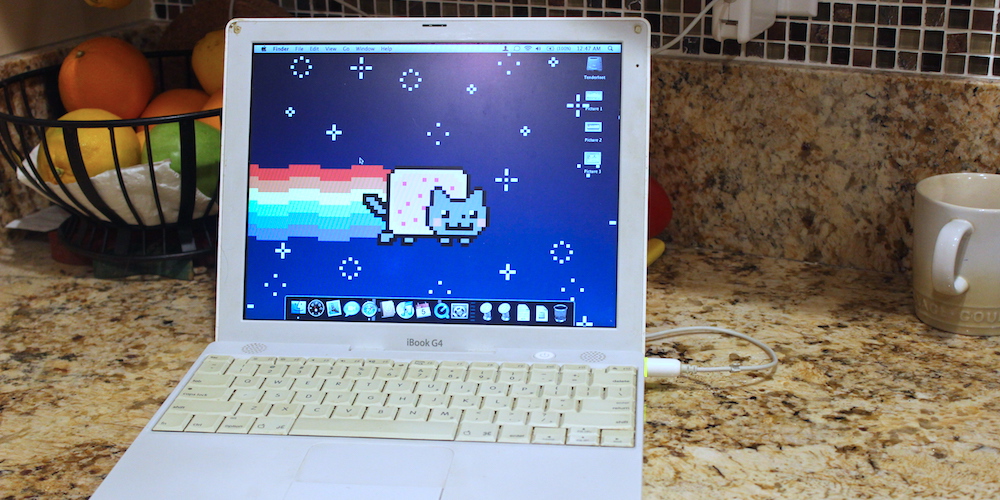 If you’re reading this, there’s a good chance that you have some sort of old old Mac sitting around the house gathering dust. There’s also a good chance, though, that you can still use that old Mac for something productive (or fun)—be it to run old games, check email, or give the kids something to use to write papers.

To see what I could accomplish with an old Mac, on a whim, I pulled my ten-year-old iBook G4 out of the closet and fired it up. My iBook is based around a 1.2GHz PowerPC G4 processor, a 30GB hard drive, and an AT Mobility Radeon 9200 GPU with 32MB of video memory. This iBook G4 shipped with 256MB of memory—a bit tight, even in 2004—but I eventually maxed it out to a more spacious 1.25GB.
‘
Its 12.1-inch, 1024-by-768 screen is small by modern standards, though it was reasonable in 2004 (it’s amazing how much more screen real estate websites require these days).

Sure, this old Mac is bulky and heavy compared to today’s svelte notebooks, but I have a soft spot for the iBook’s compact design. I wish Apple would release a new thinner, lighter Mac notebook that shared its basic proportions, but that might be wishful thinking—Apple doesn’t seem to be big on standard 4:3 displays these days.

My first challenge was to get my iBook up and running with something approaching a workable version of OS X. It had been running OS X Tiger (10.4), which is over nine and a half years old, but ran well on my hardware. I had a spare copy of Leopard (10.5), though, and I figured that I have a better chance of running more current software with this version, so I went ahead and upgraded.

Leopard is the last version of OS X that worked with PowerPC-based Macs. Installation went smoothly and it runs reasonably well on the G4, but the iBook loses out on some of Leopard’s visual effects, such as the transparent menubar. Also, Leopard is bulkier than Tiger, so I had to clear off lots of disk space to fit it on my 30GB hard drive with room to spare.

That’s right. 30 gigabytes. Your iPhone may have more storage space than my iBook.

My Leopard DVD installed version 10.5, but the latest version of Leopard is 10.5.8, so I went and ran Software Update to get as up-to-date as I possibly could. But when it was time to install the update, Software update never progressed beyond the “Configuring update” screen. Um. Not good.

As it turns out, this is a known issue with OS X 10.5 through 10.5.5, and the solution was to quit out of Software Update (command-Q worked, even though the menubar was hidden; it just dumped me back to the login screen) then download and install the 10.5.8 combo update from Apple’s website.

I had better luck this time, and 10.5.8 installed as expected. Whew.

Leopard shipped with Safari 3.0, and the 10.5.8 upgraded me to Safari 4.0.2, but both are severely antiquated. While some sites like Google.com loaded fine, others didn’t work properly—the navigation bar on Apple.com didn’t even appear.

You can still download Safari 5.0.6 for OS X 10.5.8, and it works OK for the most part. Macgasm looks fine—complete with custom display fonts—and Apple’s site displays properly, too. But when I visited YouTube.com, I was presented with a message telling me that my browser is old and terrible (i paraphrase) and that I should upgrade to the latest version of Safari, Chrome, or Firefox.

I would’vd done just that, YouTube, if any of the latest versions actually ran on my computer. Google Chrome requires Snow Leopard (which doesn’t run on PowerPC-based Macs), as does Firefox and any newer version of Safari. but you’re not completely stranded with an outdated browser.

Enter TenFourFox. It’s a fork of Firefox that’s been back-ported to PowerPC G3-, G4-, and G5-based Macs, and it supports all the modern Web standards. The one shortcoming, however, is that it doesn’t support browser plug-ins (its developers say Firefox extensions should work OK, though).

Oh, and YouTube seems to be cool with it. Success. Unfortunately, YouTube’s HTML5 video player requires more computing power than a 1.2GHz G4 processor can provide, so videos don’t run very smoothly. Most standard, HTML-driven sites are usable, though, including the WordPress blogging system that Macgasm uses.

Ultimately, I didn’t have occasion to download and install a lot of software on this machine (did I mention that this thing has a tiny storage capacity?), but poking around yielded mixed results as far as software availability is concerned.

Seeing as Apple hasn’t made a PowerPC-based Mac in eight years, most developers have, understandably, moved on and now focus mainly on today’s Intel-based Macs. You can’t access the App Store, either, since it requires 10.6 Snow Leopard and an Intel-based machine.

Still, PowerPC-friendly software still exists. Dropbox still supports PowerPC Macs, for example, and the makers of Flux (which adjusts your screen’s white point to make it less glaring at night) still have an older version available for download. And TenFourFox will cover your web browsing needs.

For many other popular apps, though, you’ll need to hunt down an older version that works on PowerPC machines. For example, you’ll have to settle for Microsoft Office 2008 (assuming you have a G4 or G5; you’ll need Office 2004 for your G3), as all later versions are for Intel Macs only. iWork 09 and earlier will run on the G4 and G5; G3 Mac users will have to settle for iWork 05. Additionally, OpenOffice.org still provides downloads of older, PowerPC-compatible versions of its suite.

Of course, if, like me, all you need is something to enter text into, you might find the bundled TextEdit app works well enough.

Your old Mac can still have fun, too. You can still find PowerPC versions of OS X shareware classics, such as Ambrosia’s catalog of older Mac games (EV Nova, anyone?). Candy Crisis, another addictive favorite of mine, also runs nicely. If your old Mac can boot into Mac OS 9—or runs a version of OS X that supports Classic—you might lose your weekend to rediscovering some long-lost gamer obsessions.

Since nearly all G3, G4, and G5-based Macs come with some form of USB, your keyboards, mice, and other input devices should all just work. Printers should work, assuming you can get compatible drivers.

I’m lucky in that my iBook’s power brick is still in good shape, and its battery, although somewhat worn down, still holds a charge. If your old Mac laptop isn’t as lucky, though, you’ll have a harder time getting your old Mac up and running. but it isn’t impossible.

Apple no longer sells power adapters and batteries for PowerBooks and iBooks, through its online store, so if either of those is failing on you, you’ll have to look elsewhere.

Ebay and Craigslist are obvious starting points for finding replacement chargers and batteries, but those channels carry the inherent risks you face when buying anything used—they simply might not work.

If you’d rather buy new, start by checking with your local Apple service provider. Repair shops can sometimes get items for older equipment that is otherwise unavailable as service parts, so it might be worth checking out.

Another possibility is to go with a third-party replacement. Other World Computing offers batteries and power adapters from NewerTech that are designed to work with the iBook and PowerBook G4. I can’t vouch for the quality of either products, but those options exist if you want to go that route. My family’s first computer was a second-hand Mac Plus that we purchased around 1991. By then, the Mac Plus was a 5-year-old machine, and even though it had a fairly slow processor and a small black-and-white screen, it was still perfectly usable for basic computing up until when we finally upgraded to something newer in 1997.

The same holds true for a decade-old Mac in 2014. You’re not going to be able to run a lot of the latest and greatest software on a PowerPC-based Mac, but you might find that your old Mac still has plenty of life left to it.

In all this, I realized just how much I liked the old 12-inch iBook. And since I can write and publish stories—and carry out basic image editing tasks—from my iBook, I can already see myself pulling out this old Mac when I want to sit and write with relatively few distractions.

If you’re looking for a fun weekend project, pull that old Mac out of the closet, dust it off, fire it up, and see what it can still do for you. You might just be surprised.