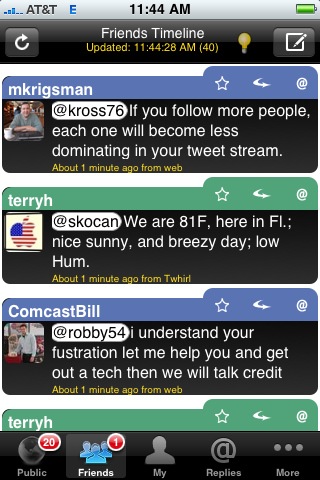 The iPhone OS has copious choices in terms of twitter applications. Some are free, some are paid. They’re all inherently the same, but some extend beyond Twitter’s native functionality. Let’s look at five different iPhone OS Twitter clients today. LaTwit has emerged as one of the first Laconi.ca and Twitter applications in one. It has some unique features, which includes combining multiple timelines into one view, the ability to turn on and off accounts, and your choice of which url shortening service to use. LaTwit is available in the App store and is $2.99. Tweetie, just like the desktop based application, is maintained by the folks over at Atebits. Tweetie includes several features that have been cropping up in twitter applications lately. with the iPhone 3G you have a GPS receiver, and tweetie uses this to find twitterers near you. Which is something useful if you need to find a good place to eat while traveling, or to find other people to follow in your area. Tweetie is $2.99 and is available in the App store. TwitterFon is a basic twitter application, it doesn’t include all of the features that some other applications have included. It keeps with the traditional iPhone OS application style and is clean, neat, follows visual standards and does not add unnecessary features that would detract from just getting the basics done. TwitterFon is entirely free and available in the App store. Twitterific, much like it’s desktop cousin, was one of the first iPhone OS Twitter applications.It’s maintained by the folks over at the iconfactory. The features of the Iphone OS twitter client are the same as though of the desktop application. They include favorites, replies and direct messages, as well a location specific options. There are two versions, the free ad-supported version and the $9.99 paid version without ads. Both are available in the App store. Nambu, by the folks over at nambu.com. Nambu has a few features which aren’t necessarily present in other Twitter applications, like Friendfeed, pic.im and ff.im. Nambu also support Laconi.ca as well as identi.ca and ping.fm. So it’s definitely a multi-social networking application. Nambu is absolutely free and available in the iPhone OS App store.

These are by no means nearly all of the twitter applications. These are just a few of the ones that are available for the iPhone OS on the App Store.