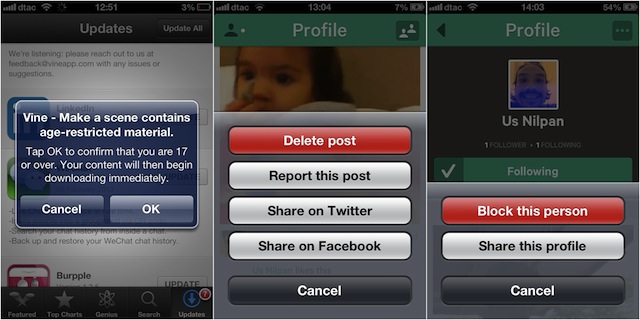 Vine, the video-sharing app by Twitter, has a new update today, bringing a mature age rating, an option to report or block users, and social sharing abilities after videos are posted.

Photo-sharing service 500px was also removed from the App Store over adult content fears but then was re-added with a 17+ age rating. Tumblr also joined the club by updating to require a mature confirmation as well.

Vine now also has the option to report or block a user profile, which is an addition to the already existing option to report a specific video. This is another move by Twitter to manage inappropriate content and the block function is similar to that of Twitter’s own service.

You can get Vine from the App Store now for free.