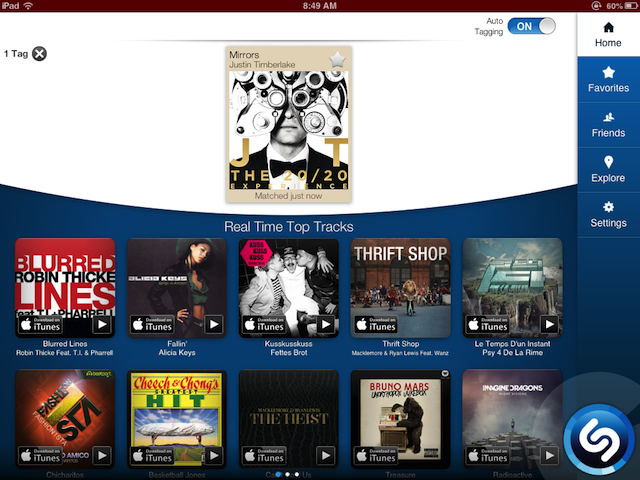 A major update has been released today for Shazam that brings it to version 6.0.0. Shazam is now a universal app and the developers have brought some interesting new features to the iPad, including auto-tagging, running in the background, new home screen and more.

With the new update, Shazam is doing away with the standalone iPad app and rolling the iPhone version out as a universal app. The iPhone will only get the mapping feature for now though.

With auto-tagging, the new Shazam for iPad will now automatically tag every song you listen to and every show you’re watching. When auto-tagging is turned on, the app will automatically listen to everything in reach and find a match for it. Songs, TV shows and other media that are identified are then stored in the Shazam app. Users can then browse through the list to find songs your might have heard and then buy it on iTunes or stream it with your favorite music service.

An interesting aspect of this feature is that it works in the background. You can be checking emails on your iPad, playing a game or even have your iPad on the lock screen and Shazam’s auto-tagging will still function in the same way. Enabling or disabling auto-tagging is done through the red bar on the top of your iPad screen, which signifies that Shazam is using the iPad’s microphone.

Auto-tagging actually seems like a pretty neat feature. You can have Shazam open while watching a TV show and by the end of it you’ll have a list of all the music that played during the episode. The new update also brings an interactive maps so you can zoom around from your current location to other cities and countries to see what else people are listening to. Shazam also has a new home screen. With it, you can browse real time updates of what’s been tagged on TV right now, available only in the US, and the most popular tracks around the world.

You can also flip through your recent matches and add the ones you like best to your favorites list.

Shazam EVP of Marketing, David Jones, said that the iPhone will get auto-tagging later this summer. It was specified when Android will see the new feature, but other features of the new iPad app will make their way to the tablet version of Android in the next two months.

The new Shazam is available now for free in the App Store.

The real question now, however, is just how long it will be until Shazam starts tagging everything we mention while it’s eavesdropping on our media.