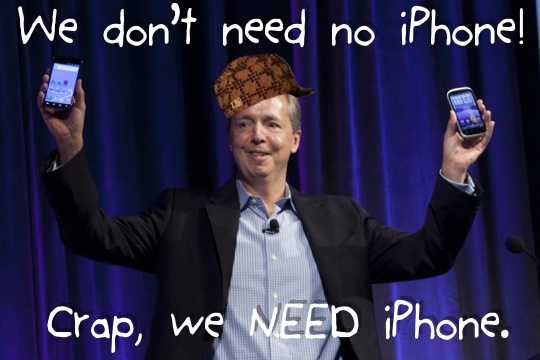 Sure, losing 700,000 customers is a hard thing to swallow, but running out and pointing the finger directly at Apple doesn’t really solve your problems. T-Mobile, on the heels of a terrible 2011 fourth quarter, is pointing the finger squarely at Apple and the success the company had with the iPhone 4S launch. You see, T-Mobile is the only major network left in the US without the iPhone at this point, and customers are tired of waiting for an official T-Mobile compatible iPhone at this point, so they’ve all jumped ship to competitors.

According to the New York Times:

[quote]In a teleconference on Thursday morning, Philipp Humm, T-Mobile USA’s chief executive, cited the release of Apple’s iPhone 4S in the fourth quarter of 2011 as a major force behind those losses. The iPhone is available on AT&T, Verizon and Sprint; T-Mobile USA is the only major American carrier left hanging.[/quote]

Does anyone else briefly remember T-Mobile telling the masses that the iPhone wasn’t that big of a deal earlier this year? That they wanted to bring it to its customers, but that Android was doing well for them? That the lack of iPhone wasn’t going to be a problem moving forward? What changed between then and now? I mean, we feel for T-Mobile. It’s got to be hard being the only kid left without a dance partner at the ball, but man, don’t downplay the iPhone in one breath, and then turn around and play the woe is me card the first chance you get.