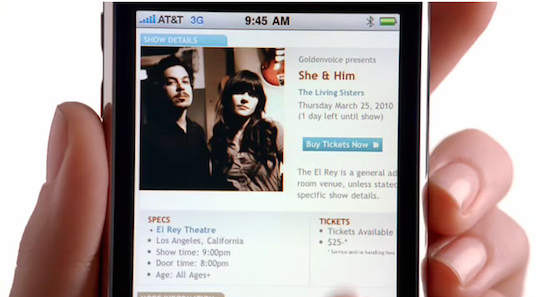 Apple is in some hot water with New York-based photographer Taea Thale for using one of her photos in an iPhone television advertisement that focuses on Zooey Deschanel’s band She & Him. The advertisement focuses on how easy it is to download music and get concert listings with the iPhone.

(d) To the best of Your knowledge and belief, Your Application and Licensed Application Information do not and will not violate, misappropriate, or infringe any Apple or third party copyrights, trademarks, rights of privacy and publicity, trade secrets, patents, or other proprietary or legal rights (e.g. musical composition or performance rights, video rights, photography or image rights, logo rights, third party data rights, etc. for content and materials that may be included in Your Application);

Just in case you haven’t read the block quote, Apple clearly indicates that developers control all copyrights associated with their applications, and that developers should not include media that they have no legal right to use.

iLike used the photo of She & Him; Apple gets sued.

It’s going to be really interesting to see how this one plays out in the coming weeks. Will iLike get yanked from the App Store for copyright violation? Is Apple responsible for the copyright infringement despite clearly pointing out in section 3.2 of the Developer Agreement that applications avoid this kind of thing?

I’m not a lawyer, so I have no idea. But if you ask me, Taea Thale should be suing iLike, not Apple.

Check out the video yourself