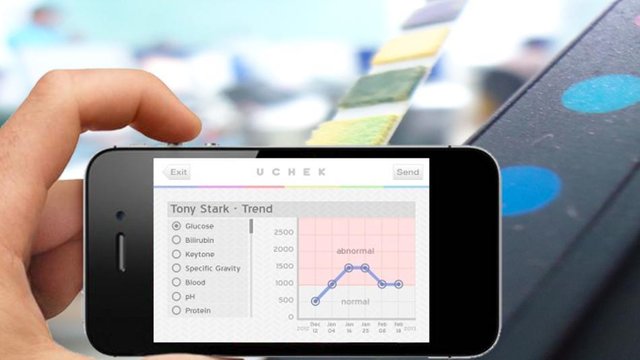 Instead of using the iPhone camera to take Instagram pictures of the sun setting, its time to start using our high-end phone cameras for something useful, like taking pictures of our own pee.

Twenty-nine year old Myshkin Ingawale of Mumbai has created the app Uchek, an iPhone app that provides a cheap and alternative way of analyzing our urine from home. The app, currently going through the App Store approval process, uses the iPhone’s camera to periodically record pictures of the user’s own pee at set times over the span of a few days. It then returns surprisingly detailed information.

The app takes mere seconds to analyze the “glucose, bilirubin, proteins, specific gravity, ketones, leukocytes, nitrites, urobilinogen and hematuria” levels that are present in the urine. The app describes its results in words everyone can understand such as “normal” or “abnormal” and “trace” or “large”. This information can be useful to people suffering from diseases such as diabetes, which require constant monitoring of one’s diet.

The app itself only costs $0.99; however, Ingawale will also be selling a $19.99 physical pack that ships a set of test-strips and a color-coded map that customers must buy in order to properly conduct their own tests.

An Android version is also in the works, although the wide variety of cameras on the platform make creating the app a more difficult task.

Perhaps the Uchek app, which in testing proved to be more accurate than the human eye in analyzing our pee, is the beginning of our phones replacing doctors in society. As long as when iPhone 8 comes out it’s able to perform basic surgery, I’ll be satisfied.