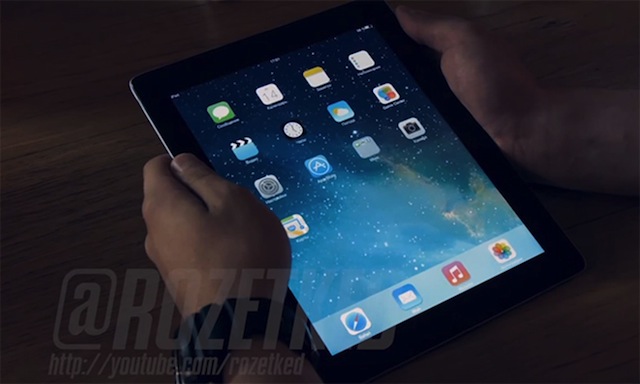 We’ve all gotten a pretty decent look at what iOS 7 will look like on the iPhone, thanks to WWDC and now developers who have been able to test it out. But, how will the new software look on a bigger screen? Rozetked, a YouTube user in Russia, answers that exact question with a video that allegedly shows what iOS 7 looks like running on an iPad, even though it hasn’t actually been released to developers yet.

Rozetked claims he is demonstrating an alpha version of iOS 7, but how he actually got his hands on it is anyone’s guess. It could just turn out to be a pretty impressive rendering. Either way, it looks pretty legit and gives you a great indication of what the new software will look like on your iPad when it officially launches to the public in the fall.

Overall, it looks pretty good. The video gives you a look at the lock screen, which is pretty much the same as the iPhone’s, only bigger of course, and the iPad’s apps feature the same redesign that we’ve seen on the iPhone.

The video also demonstrates Notification Center and Control Center on the iPad, which have a nice proportion for the larger screen, and aren’t unnecessarily stretched to fit the screen size. The Control Center lacks the Flashlight setting like the iPhone, but does offer more iPad-compatible options, like AirDrop and AirPlay.

To compare, the iPhone’s Control Center offers a Flashlight, as well as easy access to the Clock, Calculator, and Camera.

The video also shows a number of different apps, like Music and Videos, as well as a couple of third-party apps. Rozetked also demonstrates folder functionality and 2x app mode.

Take a look at the video above and see what you think. Apple didn’t specify when iOS 7 would be released to developers, beyond saying “in a few weeks,” so this is all you’re going to get for the time being.