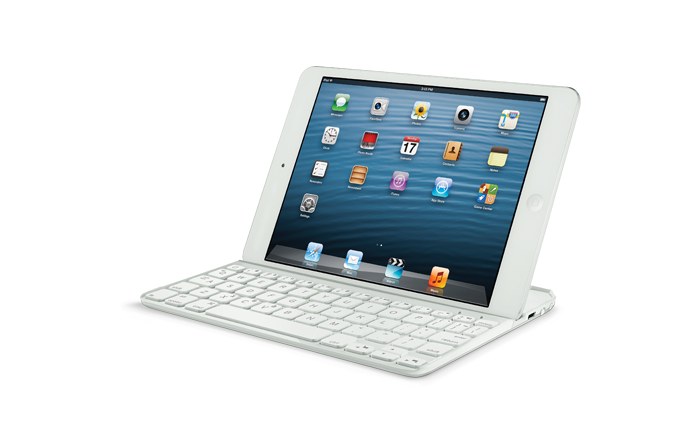 Similar to the one for full-sized iPads, Logitech has announced a smaller version of the Ultrathin Keyboard designed for the iPad mini. It will sell for $80, and it’s expected to ship later this month.

The Ultrathin Keyboard mini connects to your iPad mini via Bluetooth. When not in use, the alumnium shell of the keyboard attaches to your iPad mini with a magnetic hinge along the side, just like Apple’s Smart Cover, acting as a protective cover that puts your iPad to sleep when closed and wakes it up when it’s opened. When using the keyboard, the iPad mini will sit in the groove of the Ultrathin Keyboard, which also acts as a stand.

Even though it is smaller in size, Logitech says the Ultrathin Keyboard mini has the same full-sized keys as the original version, as well as a standard key layout. Logitech was able to keep full-sized letter keys by using smaller versions of keys like Return, Shift, and punctuation characters, as well as by taking out keys like Tab and Caps Lock.

The Ultrathin Keyboard mini is available in black or white. It charges via USB, and Logitech says a full charge can power the keyboard over a three month period if used for two hours a day.  So in reality, you’ll probably only get a week of use if you’re using it all day long.