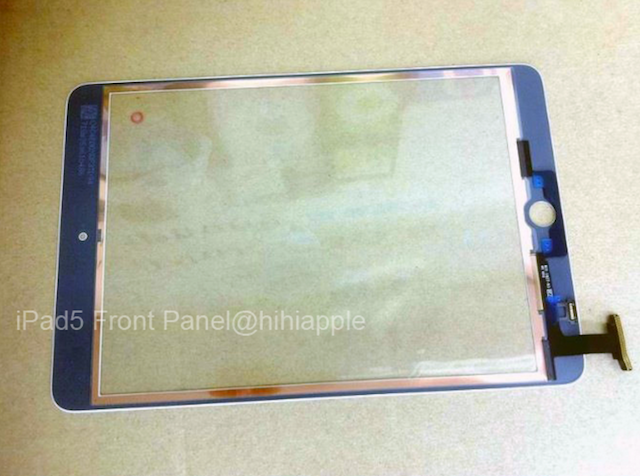 With the season of new Apple devices fast approaching, we’re starting to see actual(?) images of next-generation devices. Today’s image of the day is an alleged front panel of the iPad 5 featuring an iPad mini design with bezels. Along with images that surfaced back in January of the rear shell, it seems more and more likely that Apple is definitely adopting a new design for the new iPad, one that resembles the iPad mini design.

Today’s featured image comes from Apple.pro and, though it hasn’t been confirmed as an official part, it definitely lines up with rumors of an iPad with thinner side bezels, as well as thinner top and bottom bezels.

The worry, when Apple initially launched the iPad mini with thinner bezels, was that this new feature would create a nuisance when accidentally touching the screen where you didn’t mean to and being taken somewhere else. Apple fixed this problem by applying built-in thumb rejection technology, which allows users to overlap the touchscreen a little bit with their thumb while holding the device without triggering anything on the screen.  Presumably, this feature would also be part of a full-sized iPad with thinner bezels.

We won’t know for sure if this is a legitimate part of the next-generation iPad until it launches, which, if rumors hold true, unfortunately won’t be until the fall alongside a new iPhone