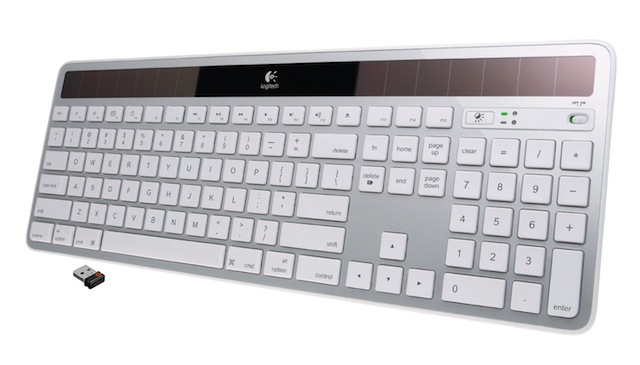 I love my Apple Wireless Keyboard, however, I often find myself going through batteries pretty frequently. Sure, I could get a set of rechargeable batteries for my keyboard, but then I would still have to go through the process of physically replacing them. Not to mention rechargeable batteries still use traditional electricity. If you would like to avoid both of these annoyances, you should look into the K750 Wireless Solar Keyboard by Logitech. ‘

If you couldn’t tell by the name, the K750 is a solar-powered wireless keyboard. Logitech claims that the keyboard can be charged by both natural light as well as artificial light from lightbulbs. Since the keyboard is always charging (unless you’re typing in the dark), you’ll never have to change your keyboard’s batteries. However, typing in the dark isn’t an issue due to the keyboard’s three-month battery life.

The keyboard is available in both Mac and PC variants, each of which offer specific keyboard layouts. When you purchase the Mac version of the K750, all function keys will be labeled the same as any stock Apple keyboard. The Mac variant looks very similar to Apple’s own wireless keyboard, but with the addition of a numerical keypad.

The only major downside to the Logitech K750b is the fact that is uses a proprietary wireless connection to connect with your Mac. Instead of Bluetooth, you’ll have to use one of Logitech’s USB connected wireless dongles. The keyboard comes with a dongle and they can be used with multiple Logitech devices.

If you’d like to purchase a Logitech K750 solar keyboard for your Mac, expect to drop just over $59 for one on Amazon.com. When ordering, you’ll have the choice of both black and white color options.