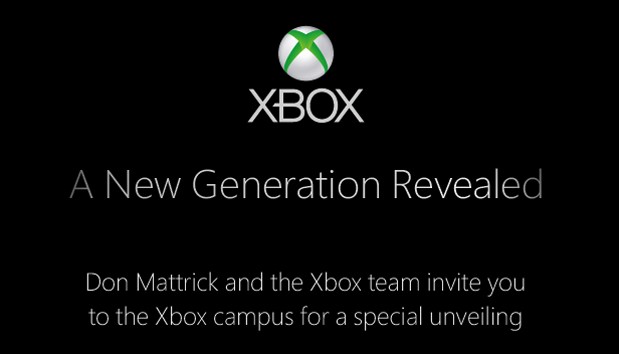 Microsoft has finally come out with the date that it will reveal its upcoming next-gen console. The company will hold an event on May 21 where the Xbox team will present a “special unveiling.”

The event was announced on Xbox Director of Programming, Major Nelson’s blog:

“On Tuesday May 21st, we’ll mark the beginning of a new generation of games, TV and entertainment. On that day, we’ll be holding a special press event on the Xbox campus and we invite you to join us via the live global stream that will be available on Xbox.com, Xbox LIVE and broadcast on Spike TV if you are in the US or Canada.”

On that day, we’ll share our vision for Xbox, and give you a real taste of the future. Then, 19-days later at the Electronic Entertainment Expo (E3) in Los Angeles, we’ll continue the conversation and showcase our full lineup of blockbuster games.

We are thrilled to pull back the curtain and reveal what we’ve been working on.”

While Microsoft never specifically says that it will be showing off its new Xbox, codenamed Durango, it is without a doubt that’s what the presentation will be about. Microsoft is clearly making a big deal about the unveiling, as the company will be broadcasting the announcement on national TV.

It sounds like Microsoft plans to use the May 21 event to unveil the console, and then the e3 press conference a couple weeks later to showcase games for the new system.

Expect Microsoft to announce the launch date for Durango to be sometime in the fall in order to lineup with the release of Sony’s PS4. Also expect to see an actual physical model of the console, as opposed to Sony’s announcement where they chose not to show off the actual system.

Just a few more weeks until we finally get to see which rumors were true, and which were false.