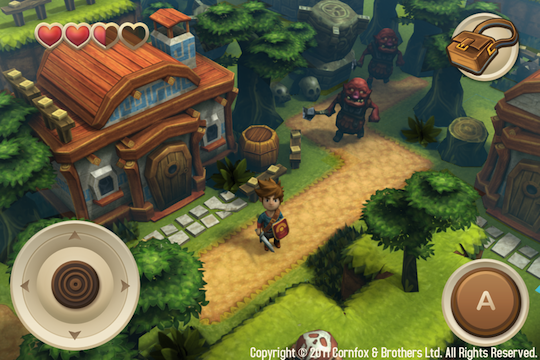 There are a lot of games from my childhood that stand out as great experiences for me, but one game above all others really takes the cake in my memory bank: Zelda. It’s been the one game from Nintendo that I keep going back to over the years, and I’ve grown to love everything about the franchise. This is why I got pretty excited when I read about Oceanhorn from Cornfox & Bros over on TouchArcade.

The game not only looks amazing, but also has a lot of similarities to Zelda, based on the pictures at least. Knowing absolutely nothing about the series or the developers, and being unable to speak on the game without welcoming a lot of mis-speak, I wanted to show some pictures from the game play, then send you over to the blog to check out some other awesome information about the game. This is the first game in a very long time that has me excited for an adventure games on an iOS device. I’m not sure how I feel about the onscreen controls that they’re displaying. I generally dislike virtual keyboards of a similar ilk, and instead prefer when developers use the same setup as Deadspace on the iPad.

Only time will tell how this one plays out, but we’re going to be keeping a very close eye on how this game evolves over the upcoming months.