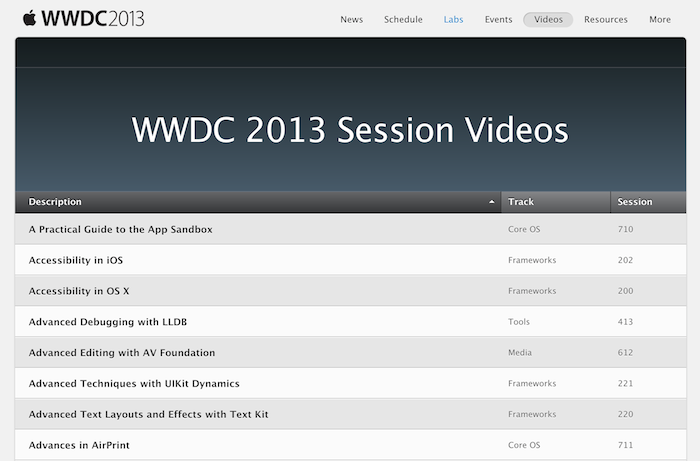 Apple has posted videos of all 2013 WWDC sessions to the Apple developer portal. These videos are available free of charge to all registered Apple developers and can be streamed via Safari or be downloaded to your desktop for later viewing. The videos cover everything from accessibility in both iOS and OS X to testing your apps in Xcode 5.

These videos will be extremely helpful for developers who need to update their applications for iOS 7 and OS X Mavericks. Many design changes will have to be made to existing apps for use in iOS 7, so it will be nice to have a visual guide to walk you through the changes.

This year’s WWDC, or World Wide Developers Conference, took place from June 10th to June 14th. The event kicked-off with Apple’s famous keynote where iOS 7 and OS X Mavericks as well as a new MacBook Airs and a new Mac Pro were announced. The rest of the event included tons of informational sessions for iOS and OS X developers. Tickets to the event sold out in just over 70 seconds, so it’s nice that Apple is giving developers who couldn’t purchase tickets access to the sessions for free.