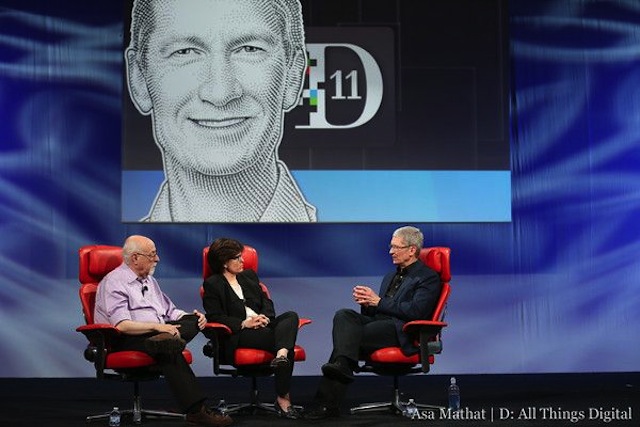 In case you missed it, last night Apple CEO Tim Cook was interviewed at the D11 conference. AllThingsD has posted the entire interview, which is one hour and 20 minutes long, online this morning so if you missed it now’s your chance to catch up on everything he said.

As expected, Tim Cook didn’t talk about any new or rumored products, but he did open up about a few things. If you don’t have time to watch the whole interview, here are a few highlights:

On making a bigger iPhone, multiple devices: “A large screen today comes with a lot of trade-offs. People do look at the size. They also look at things like to the photos show proper color, battery life, brightness, etc. What our customers want is for us to weigh those and come out with a decision. […] It takes a lot of work, a lot of really detailed work, to do a phone right when you manage the hardware, the software, and the services around it. And we’ve chosen to put out energy in getting those right… and we haven’t become defocsed in working multiple lines. Well, we haven’t made [multiple devices] so far. That doesn’t shut off the future.”

On bringing apps to other platforms: “Would Apple port an app from iOS to Android? We have no religious issue. If we thought it made sense to do that, we would do that. You can take the same philosophy and apply it to iCloud. Would it make sense for iCloud? It doesn’t today.”

On Apple’s recent ongoing tax woes: Cook wants Apple to be a catalyst for discussion and proposed at Congress for a revenue-neutral but major overhaul of corporate taxes. He feels that simplicity is good and that’s how Apple approaches everything. Apple’s tax return is two feet high and “I would suggest we gut it.”

On Google Glass and the iWatch: “I don’t know a lot of people that wear [glasses] that don’t have to. […] The wrist is interesting,” noting that it’s more natural but “you still have to convince people it is worth wearing.”

On opening up to third-party developers:  “Of course.  On the general topic of opening up APIs, I think you’ll see us open up more in the future, but not to the degree that we put the customer at risk of having a bad experience.  So there’s always a fine line to walk there, or maybe not so fine.”

If you want to hear more of what Cook had to say, be sure to check out his full interview.