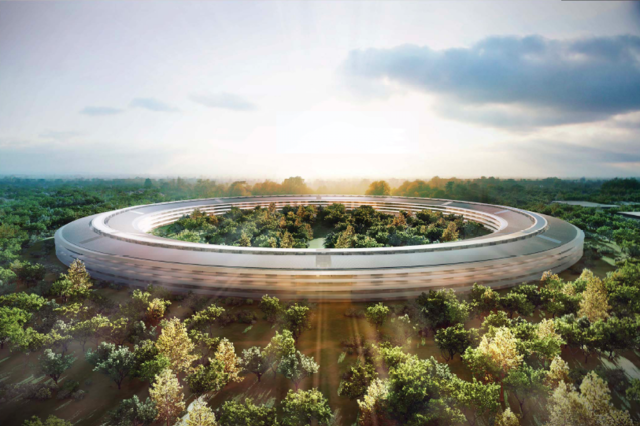 Back in 2011, at what ended up being his last public appearance, Steve Jobs presented plans for a new corporate campus for Apple that would be “a little like a spaceship,” two-thirds the size of the Pentagon, and not exactly cheap to build. Turns out Jobs didn’t know just how right he was either. According to Bloomberg, the new Apple spaceship campus is nearly $2 billion over budget, going from $3 billion to close to $5 billion.

Before his death, Jobs hoped to start construction in 2012 and move in by the end of 2015. Apple will start tearing down the 26 buildings on the site in June, according to an anonymous source. At Apple’s annual meeting on February 27, Tim Cook said the move-in date has been pushed back to 2016.

The reason for the delay is apparently because Apple is working with architects Foster + Partners to try and cut $1 billion from the budget before continuing.

Jobs was passionate about this project, explaining that it would be “the best office building in the world.” When he spoke to the Cupertino City Council, Jobs said “there isn’t a straight piece of glass on the whole building.” Cook also hinted at the annual meeting that the campus might not be exactly what Jobs had in mind. “Steve put a lot of love and attention into this before he passed away. Hopefully we’ve made it better during the design phase. We want to do this right,” he said.

The campus is expected to feature 40-foot, floor-to-ceiling panes of concave glass from Germany. Seele, the German firm responsible for creating the curved glass exterior, says it’s producing roughly “six square kilometres of glass” for the building. The company, which also makes the glass staircases that are common in many Apple retail stores, has doubled the capacity of its factory to complete the project.

The new campus is planned as a “net-zero energy” complex. It will feature architectural energy-saving tactics, like advanced skylights and an airflow design that will help cool and warm the building. On top of that, it will hold 700,000 square feet of solar panels, generating 8 megawatts of power. It’s enough to power about 4,000 homes, but Apple will still require additional power. The company is said to be negotiating deals on solar- and wind-generated power to augment its supply.