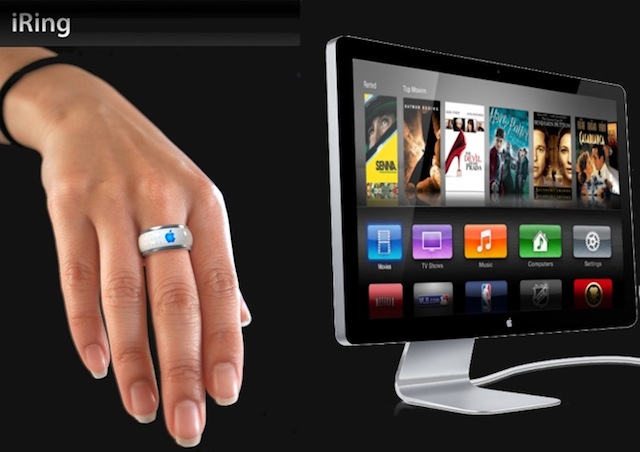 Analyst Brian White of Topeka Capital Markets released some new research today outlining some interesting features for Apple’s still-rumored television set, including an iRing motion control device. He also claims that it could launch later this year and will be available as a 60-inch model, with 50-55 inch models also possibly being available.

White’s research brings a new feature to the iTV rumours. He claims that Apple will release an “iRing” motion control device for it. He wrote:

[W]e believe Apple will release a miniature device called “iRing” that will be placed on a user’s finger and act as a navigation pointer for “iTV,” enhancing the motion detection experience and negating some of the functionality found in a remote.

White also thinks that Apple’s iWatch will have a role in Apple’s television, complimenting the iRing to support interactive TV services and phone calls.

On top of that, White expects Apple to release auxiliary screens similar to iPads, which would allow users to watch TV content on wireless devices within range of the larger television.

“iTV” will come with a “mini iTV” screen that will seamlessly allow users to view content on this smaller, 9.7-inch screen, while also opening up use cases around home security, phone calls, video conferencing and other areas. As part of this experience, Siri and FaceTime will be important. Essentially, we believe the “mini iTV” screens will be able to capture content from the 60-inch “iTV” across a distance of up to 200 meters, allowing a user to view “iTV” content in the kitchen, washroom, garage, bedroom, backyard, etc.

White believes the basic iTV package would include a mini iTV for customers to add additional screens, up to a maximum of four. He says some parts of the mini iTV would be similar to the full size iPad. They would have much more limited functionality and features and would not be a replacement for the iPad itself.

He expects the iTV package to be priced at $1500-$2500, with some service providers to possibly subsidize the cost.

Apple has been said to be trying to revolutionize the television experience, but White’s report has so far been uncorroborated, obviously.

We also believe White is on drugs…