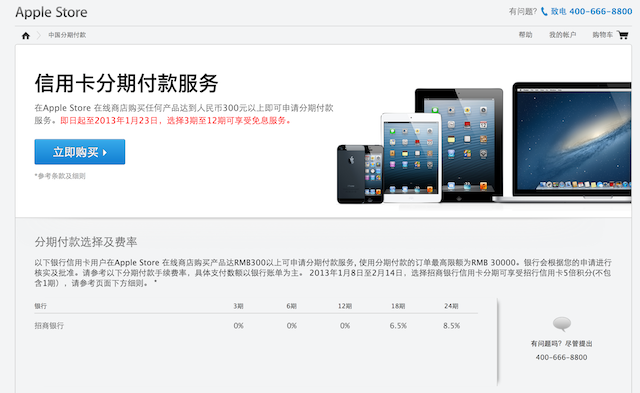 Apple users in China can now finance Macs, iOS devices and other products via the Apple Store. Financing is now available for all products in prices ranging from 300 yuan to 30,000 yuan, or $48 to $4,825. People who finance via the store will pay 0% interest on 3-12 month financing plans. Eighteen and 24 month plans will charge 6.5% and 8.5% interest charges respectively. Chinese citizens have to use China Merchants Bank if they’d like to finance an Apple product.

This financing plan may help Apple regain lost marketshare in China. Lower paid workers in China can’t afford to pay off an iPhone in a single installment, and may find it easier to pay it off over a few months. Bloomberg has reported that an iPhone that costs 5,288 yuan, or roughly $850, in the country is “equal to about six weeks’ pay for the average urban worker.”

Apple has long offered financing plans in other countries like the United States, Canada and most of Europe. This allows students and others who may not be able to purchase a Mac in one installment to pay it off over time and build credit.