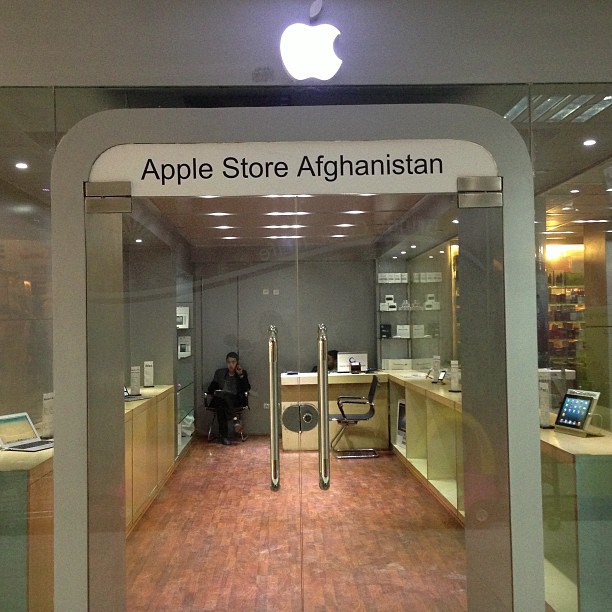 While the market for Apple products in Afghanistan is incredibly small and the country doesn’t have its own Apple Store, this doesn’t mean you can’t go to the mall and buy yourself a good ol’ iPhone. This is because of Mohammed Nasri, a man who decided to open his own (unofficial) Apple Store within the country.

While it may not have the shine or polish of a real Apple Store, the products sold at the Kabul location are the same genuine Apple products that you would buy anywhere else in the world. The store, which is located in the country’s biggest mall, has been open since August 2010 and is located in Kabul’s upper class Share-e-Naw district.

Nasri buys his Apple products from Dubai in bulk, and then re-sells them at the Afghanistan store for profit. Nasri says he sells the 16GB iPhone 5 for $700 and that he manages to sell between five or six a day as well as one to two laptops per day. He says that the profit margins on the products he sells range from $10 to $50. Not quite up to Apple’s figures…

Still, the store is reportedly doing well enough that Nasri is considering expanding to a second location within Kabul. If Apple does in fact release a lower-cost iPhone in the near future, that should also drastically improve business.

It’s unclear as to whether Apple is aware the location exists, or whether it simply doesn’t care. Nasri said he sent pictures of his location to Apple when he first opened the store to hear the company’s thoughts, but that he never got a response.

In China last year, authorities found and shut down a total of 22 unofficial Apple Store locations within the country.