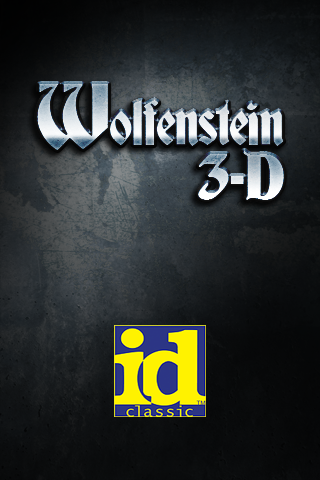 The folks over at Id Software, creators of the famed Wolfenstein 3D and Doom franchises have stretched out their famous Wolfenstein 3D franchise to the fastest growing gaming market, the iPhone OS. The iPhone OS Version of Wolf 3D is an exact port of the original Wolfenstein 3D game for PC, with the added touch controls. See the image below for an example. The graphics on the game are exactly the same with minimal changes. It stars the infamous BJ Blazkowicz. For those unfamiliar with the story of BJ Blazkowicz head on over to the Wikipedia article on the back story.

The control scheme, for being ported to a touch-based platform are exquisite. The controls are kept to a minimum as to not detract from the rest of the game play. There are two methods for controlling BJ. A method with a single control stick, that allows you to turn and move simultaneously, this is my preferred method. The second method is by having two distinct controlling actions. One for moving up down left and right, while the second is for turning BJ.

One of the more clever options with the controls is that you have the ability to fully customize the location of each aspect on the screen. So you can setup the controls exactly how you want them to be setup. This can be quite handy if you need to make sure that your thumbs are more comfortable when playing.

There have been two minor change to the original PC version that many are used to engaging themselves with. The first of these changes is the ability to see the Maps. As far as I remember, unless you wanted to do some hackery you could not see the map layouts while playing. This is not the case with the iPhone OS Version of Wolf 3D, as you can see below. The second change is the addition of the ‘Stats’ Menu. See below for an example. The stats menu allows you to see how many of the Treasure pieces you have picked up, versus the total available. Along with the number of nazis killed, and the number of secrets for each level you have located. This adds a nice little touch to be able to see how much you remember. This game will bring back hours of nostalgic gameplay for Wolfenstein 3D fans, and will even revive your love for BJ Blazkowicz and make you remember where all of the secrets are hidden. It can be yours in the App Store for only $1.99. It may not be available in Germany, since they have laws restricting video games depicting Nazis. This is a definite must buy for anybody who loved the original game, because this isn’t any different.