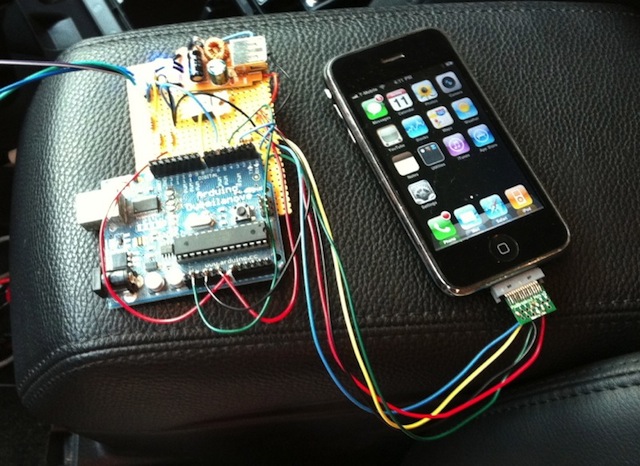 I live in Canada; it’s cold as hell here. It’s one thing to go outside on the nice winter days, but it’s something completely different when you have to start your car in a parking lot, a block away, when it’s -30° Celsius. If there is ever a definition of Do Not Want in the dictionary, I’m pretty sure that would be it.

What if you could actually start your car by text messaging it from your iPhone? Turns out someone’s already figured out how to do it with nothing more than an old jailbroken iPhone, an Arduino iPhone breakout board, and bunch of components, resisters, and other stuff.

According to Will O’Brien, the genius hacker who came up with the project, here’s how it works:

“I send a text message from my phone with the phrase: “Start 1234? (1234 would be the password in the phone script). The phone gets the text then tells the arduino via serial interface to start. The arduino grounds the wire to the remote start that activates it. Meanwhile, the phone sends back a SMS saying ‘Executed’ to let me know that it got the message and is acting on it. In the future it’ll send back a message confirming that the start was executed as opposed to the I told him to do it method.”

There’s a nice schematic available, as well as a perl script required to get the whole thing running online. Instead of rewriting the whole post, we thought we’d link it for you instead. All the work that this guy put into it, kinda deserves some click-through goodness, no?

Now, who wants to bet that this guy is Canadian?