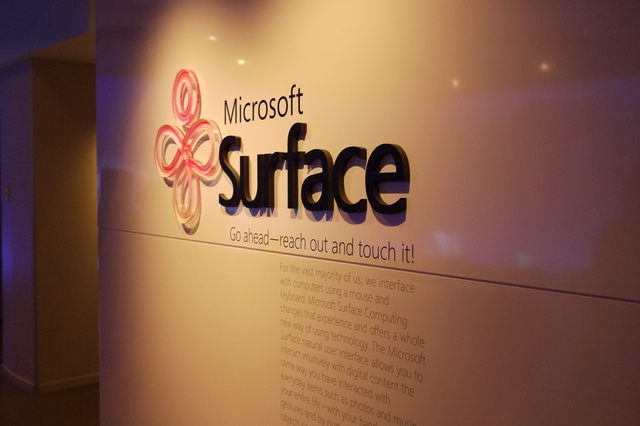 This week, I was lucky enough to see a creature so rare I was getting to the point where I thought I’d never see one. Yes, sitting in a cafe there was someone who I thought only really existed in Steve Ballmer’s fevered imagination: a real, live Microsoft Surface user.

Predictably, they weren’t using it as a tablet. Instead it sat on the table with its little kick-stand folded out and its keyboard ready, being typed on, just as if it were a regular laptop. Which, I’d argue, is actually closer to what the Surface is good for than the conventional idea of it as a competitor to the likes of the iPad or Android’s finest, the Nexus 10.

When you consider the bigger picture from Microsoft’s perspective, the Surface makes a kind of sense. Over the past few years, Microsoft has watched as the average selling price of a Windows-running laptop has dropped, thanks largely to netbooks and ever-cheaper laptops of all kinds. In 2008, the average selling price of a Windows laptop was $700. Today, it’s down to $429. By comparison, the average Mac laptop sells for over $1,400.

Microsoft’s aim with the Surface is two-fold. First, of course, it needs to stem the tide of iPads entering the enterprise market almost by stealth. Microsoft regards enterprise sales as its home territory, so when blue-chip corporations like Barclays are buying thousands of iPads because of demand for them from employees, they need to do something, otherwise they’re going to end up in deep trouble. The Surface is good enough for enterprise IT guys (and gals) to try and persuade their users that “you can’t have an iPad, but you can have one of these”. Although the “bring your own device” trend is widely viewed as the future of corporate IT, the Microsoft-loving techies still have enough clout to push users towards a Microsoft solution if they have to.

But the Surface is more than just a defensive move to protect enterprise IT accounts: it’s also designed to tempt people to replace all those millions of netbooks that were sold a few years ago, and which are going to start to need upgrading pretty soon. Netbooks were a disaster for Microsoft, because the minuscule margins that PC makers got from them made the price they paid to Microsoft for Windows a big proportion of the cost. When you’re selling a laptop for $250 retail, paying Microsoft its $50 for Windows looks like bad business.

Te Surface is more expensive than the average netbook, but even its harshest critics would acknowledge that it is a much more capable device than the low-end, plasticky rubbish that’s become synonymous with the whole netbook concept. For anyone considering an upgrade from a netbook, the Surface looks like a good deal: you get a machine that looks laptop-like, but can also function as a tablet if you want it to.

The Surface is designed to be a netbook that you can also use occasionally as a tablet. This is the reverse of the approach that Apple has taken, because the iPad is a tablet first and foremost, but can be used like a netbook if you need to. Apple sought to create an entirely new category of product: the Surface is a hybrid designed to get people to dump their netbooks in favour of something familiar, but more modern – and more expensive.

Will the Surface be a success as a potential upgrade to the netbook? It’s possible, although Microsoft will have to do a lot better with its distribution and availability if it wants to sell the Surface in serious numbers. But Microsoft doesn’t have a choice: the Surface has to work, because if the product doesn’t, Microsoft risks the gradual erosion of its market position in the enterprise and at the low end of the PC market. And that would leave it in serious trouble.