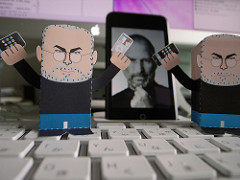 …and then the other foot dropped.

The first foot was a reassuring one, but the second foot that dropped today on the announcement of more health issues for Mr. Jobs was a stark contrast from the previous press release. It took me and I’m sure everyone else in the community by surprise today. Steve Jobs is a little sicker then he originally thought, and has decided to take a leave of absence from Apple until the late spring/early summer so he can focus on his health, and get back to his ole’ wiley self.

It’s a sad day, and hopefully it doesn’t mark the end of the Jobs era. Jobs, like the rest of us, would want to leave the company behind on his terms, and not on health terms, but sometimes life just happens. We all need to move on, and get ready to embrace the facts. A new era is definitely on the horizon, and this management team is very capable. I just hope the management team continues to get the extraordinary insights of the man who reinvented music sales, and the communications market.

I hope the best for Mr. Jobs and a hope that his return to health is expedient.