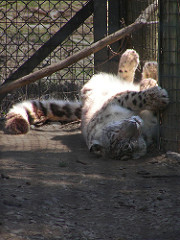 UPDATE: We got news that the release date is going to be Sept. 2009 (Click here for the Article)

Our own Wayne Dixon had gathered a pretty educated guess about the release date for Snow Leopard, but the release date he mentioned came and went, and we were left wondering when we’d seen anything officially announced from Apple regarding Snow Leopard’s release. Â It’s starting to look like the final build of the beta is scheduled to end the first week of August, and that an official release will be looming shortly thereafter. Â Looks like we can expect the big cat to pounce within the year –thank goodness.

“People familiar with the matter have previously estimate that it will take Apple upwards of two-months from the time it shows off a feature complete Snow Leopard at WWDC to deliver the software to market, suggesting a release date around August” [Apple Insider].

I don’t know about you guys, but, I’m looking forward to see what the final beta stages bring us… Â hopefully iTunes will stop disappearing when I hit CMD+Tab.